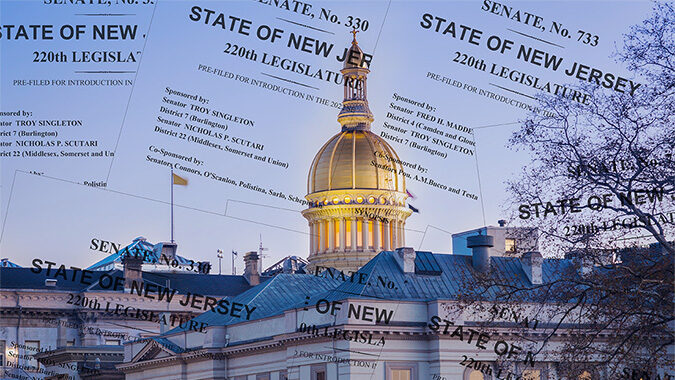 The following is a recap on the recently signed FY23 state budget as well as provide some updates on other tax and economic development issues in New Jersey.

Overall, the spring budget process resulted in a middling FY23 state budget that can best be described as a mixed bag and somewhat of a missed opportunity. Below are some key numbers on the FY23 state budget, the largest in state history at $50.6 billion. From a business and fiscal responsibility perspective, it spent too much and did not provide anything to structurally reform state spending or state taxes, and it lacked any focus on making the state more affordable for businesses. And if the business community’s eye is on the prize of favorable future tax policy such as sunsetting the 2.5 percentage point CBT surtax next year, then the surplus should have been larger than $6.4 billion, which is similar to last year and a lot less than the $8-10 billion it could have been with some spending restraint.

But, there are no new taxes needed to balance the FY23 state budget, and some of the spending increases include pro-growth investments in infrastructure, innovation and workforce development as well as a $5.2 billion debt prevention fund that NJBIA supported.

You can see below that spending increased $1.7 billion from proposed to signed budget over just a few months, while revenues increased $3.2 billion over the same few months of the budget process, mostly from higher than expected income tax revenue that is largely one-time.

Examples of the budget investments that NJBIA was happy to support include:

You can visit the following to learn more about the signed FY23 state budget:

NJBIA was disappointed that the UI payroll tax relief legislation (A-3683/A-2152/S-733/S-2378) on which we worked with the Legislature did not get to the Governor’s desk in June. The compromise bill would have provided small businesses tax credits to offset 2/3 of the impending UI payroll tax increases that resulted from the pandemic. It also would have paid off the federal UI advance to avoid a federal UI tax increase as well as providing more transparency to this tax increase. Frustratingly, UI payroll taxes went up again as of July 1, 2022, just like they did July 1, 2021, yet the state website has not been updated with the new tax rate just like it was not appropriately updated last summer.

The bill passed the full Assembly and Senate Budget & Appropriations Committee unanimously, but it was disappointingly and without explanation pulled from a full Senate vote at the request of the Governor. The Senate sponsors said the Governor’s office committed to working on the UI issue in the fall.

NJBIA wants to thank the sponsors for working on this bill to help the business community: Assemblyman Freiman, Majority Leader Greenwald, Senator Madden and Senator Gopal.

You can learn more with the following on the UI tax relief disappointment:

NJBIA has said before that workforce development is economic development, and we received some good news for our summer workforce and economy. NJBIA led a business community coalition made up of other business associations as well as hospitality and retail businesses to get a law passed to make it easier for teenagers to work and to work for longer hours. New Jersey had antiquated teen worker laws and was one of the strictest states in the nation for 16- and 17-year-olds to work. In the middle of a workforce crisis and after the success of the temporary teen worker expansion last summer, NJBIA was happy to work on this permanent update in the law concerning minor workers to help our employers increase their capacity, to help our teenagers make get more experience and more money, and to help every person in New Jersey who may see less of a wait this summer at their favorite restaurant or boardwalk.

You can learn more about the new teen worker law at:

NJBIA was happy to support two pieces of legislation to adjust the recent UEZ reform that limited sales tax relief in UEZs, one that became law and one that passed the full Senate.

NJBIA was happy to support a bill authored by Treasury’s Division of Taxation – A-4295/S-2876. The bill would make three tax administrative changes that were sought by the Division of Taxation and business taxpayers: remove taxpayer inequity caused by COVID state of emergency, streamline S-corporation tax filing process and adapt federal partnership audit changes.

The bill unanimously passed the full Assembly but never moved in the Senate with too many other things going on in June. Senate passage will be our goal in the fall. You can read more about it at NJCPA’s article about it, as NJBIA was happy to collaborate with them to support the bill.

Please let me know if you have any questions about any of the matters listed above, and I look forward to continuing to work with and advocate for you all to try to make New Jersey a better state to do business!