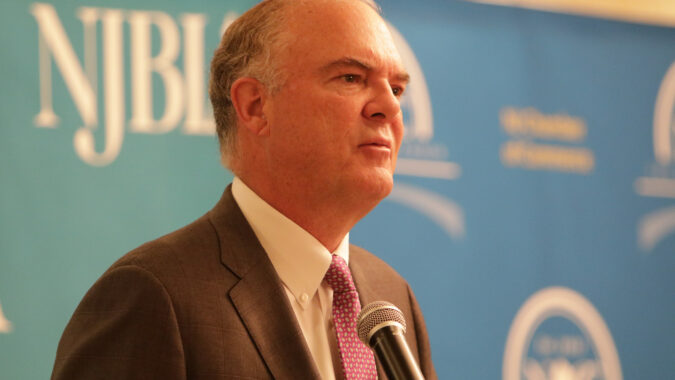 New Jersey Department of Environmental Protection Commissioner Bob Martin made his return to NJBIA’s Meet the Decision Makers Series on Wednesday, proudly reflecting on the culture change he brought to the agency in his nearly eight years of state environmental leadership, which also promoted a stronger economy through common-sense regulatory reform. 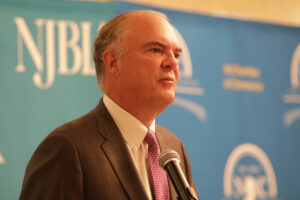 “It’s been a wonderful job that I love,” Martin told businesses leaders at the National Convention Center in East Windsor. “I’m very proud of what we’ve accomplished. I think we had a vision and a plan that we saw all the way through, and our work is still continuing.”

Martin said his first command from Christie when he was named to his cabinet was to “fix the agency.” For Martin, who retired in 2008 as a partner at Accenture LLP, the world’s largest business and technology consulting firm, it meant changing a culture inside DEP and improving the agency’s reputation from the outside looking in.

“I said, ‘Yes, we can.’ We’re a regulator. But we can still answer the phones, answer questions or write a letter back. And people got that message loud and clear – that we were picking up the phone and talking with the public.”

Improved customer service also came in the form of a new Office of Permit Coordination that provided companies and entities the opportunity to deal with a single correspondent for major projects that required multiple permits both within DEP and other state and federal agencies.

“I think we saved a lot of money for companies and made the permitting process easier having everything under one umbrella,” Martin said. “We also recognized that if we were going to say no to a project, let’s say no quickly. Having businesses spend sometimes millions of dollars on project designs without designating where they won’t be allowed to do certain things is wrong.”

Martin also highlighted the effort of DEP’s Office of Alternative Dispute Resolution, which provides a forum other than administrative and trial courts for the resolution of disagreements between the regulated community and DEP. Martin said the program has had a 90 percent success rate of “both sides walking away and saying, ‘I’m OK with that,’” rather than getting involved in costly legal proceedings.

Martin also stressed the need for regulatory reform, citing more than 160 federal and state laws over the past two decades that created significant complexities for residents, municipalities or businesses in search of permits.

During his tenure, there have been multiple rule-changes and technological advances to streamline the previously cumbersome DEP permitting processes. Martin said he is proud that the regulatory reform under his direction has not come with the cost of reduced environmental protections.

Martin anticipates a return to the private sector with the governor set to leave office in January. He credited Christie for giving him the opportunity “to pick my own team.” For anyone in New Jersey’s business community concerned about the return of a more bureaucratic DEP, Martin offered advice:

“Share your points of view with each candidate for governor,” he said. “You have a strong voice. Let them know what you think is working and what still needs to be worked on.” 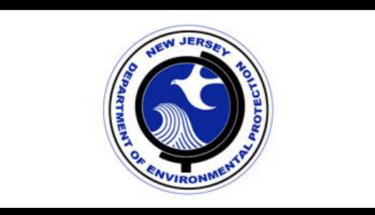