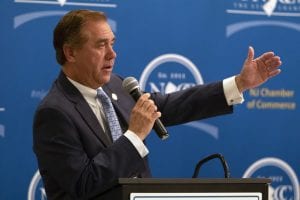 All indications are that New Jersey will adopt a $15-an-hour minimum wage this year. Gov. Phil Murphy campaigned on the issue and the Assembly and Senate leaders support it.   Based on previous interactions with the Legislature, NJBIA believes that there is little to stop such a bill.

That doesn’t mean the business community’s concerns will be ignored.

Speaking at Meet the Decision Makers on Monday, Assembly Speaker Craig Coughlin indicated that the $15 wage would not be implemented right away, and that it may not impact all businesses.

“I understand the business community’s concerns and can assure you they will be taken into account when the Legislature takes up a $15-an-hour minimum wage bill,” Coughlin said.

In meeting with business groups, including NJBIA, he indicated that there will be lengthy implementation and that it may include exceptions or “carve-outs” for certain types of jobs and certain industries.

Overall, however, Coughlin believes a higher minimum wage will be good for everyone.

“The extensive body of research … has found that raising the minimum wage boosts income for lower paid workers without reducing the overall employment and job growth.”

NJBIA will continue to work to mitigate the negative impact on businesses from any legislation that mandates an increase to the state’s minimum wage. NJBIA members are encouraged to join NJBIA’s  Minimum Wage Workgroup by contacting Mike Wallace at mwallace@njbia.org.