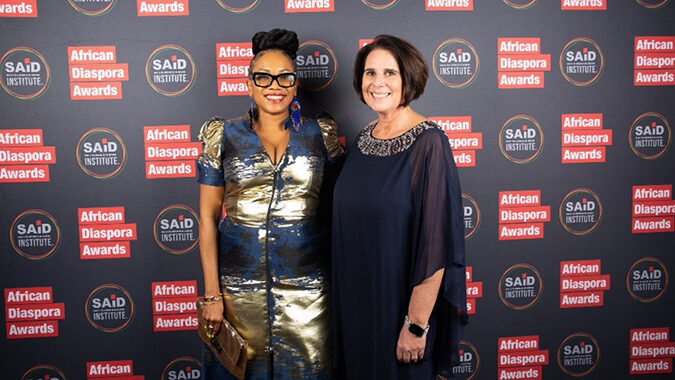 Busie Matsiko-Andan, an award-winning global strategist, entrepreneur, and member of the Berkeley College board of trustees, was recently honored for her community impact during the 10th Annual African Diaspora Awards.

“Busie Matsiko-Andan has never lost sight of the importance of helping others achieve their goals,” said Diane Recinos, Ed.D., President of Berkeley College, who introduced Matsiko-Andan during the Dec. 5 ceremony, alongside Henrietta Wamala, president, Ugandan North American Association. “Busie continues to be a powerful advocate for our students at Berkeley College, motivating them to achieve what she knows is possible for them.”

Matsiko-Andan holds a Bachelor of Business Administration in Management from Berkeley College and was named the College’s 2011 Alumna of the Year.

“Busie has always been a champion for education,” Wamala said. “Her tenacity to educate and engage her peers helped shape the way for those after her who carried on her baton.”

Born in South Africa to Ugandan and South African parents, Matsiko-Andan said she was drawn to Berkeley College because the institution provided an environment where students of diverse backgrounds could thrive.

“A college education can change the trajectory of your future,” said Matsiko-Andan, who was named a board trustee in 2021.

Matsiko-Andan has held positions on Wall Street at Smith Barney, Oppenheimer & Co., and Citibank. Soon after earning her degree from Berkeley College in 2004, Matsiko-Andan emerged as a fashion influencer, co-founding one of the first fashion-technology companies, Fashion Indie, which was acquired by Nylon magazine.

Most recently, Matsiko-Andan serves as founder and CEO of Pont Global, a boutique management firm focused on elevating women. She has been a leader in diaspora affairs for more than 20 years, and is executive director of the Africa Future Summit, a forum that brings together leaders and influencers from around the world to address the challenges that impact Africa’s future.