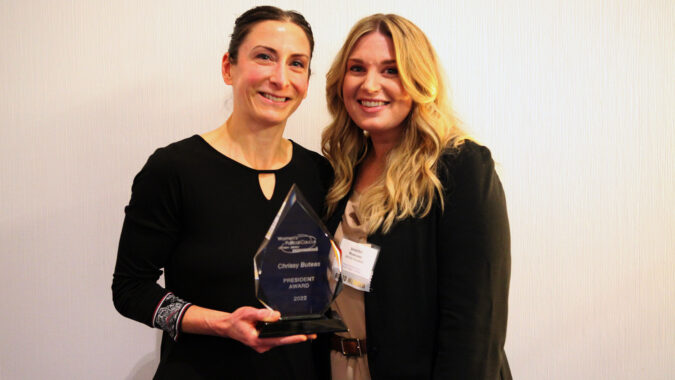 WPCNJ’s President Award is not often presented. But when it is goes to a woman who has contributed extraordinary service to the organization and “distinguished by their selfless donation of time and resources to our organization and our goals,” according to WPCNJ President Jennifer Mancuso.

“For anyone that knows Chrissy, you know that when she commits herself to something, she is physically and psychologically incapable of giving less than everything she has in that effort,” Mancuso said.

Buteas served as president at WPCNJ from 2016 to 2019 and on the nonprofit’s board and executive committee for years.

“I am extremely humbled to be here and to receive this honor from an organization that has done so much for me over the years,” said Buteas, who first joined the organization soon after graduating Rowan University in 2004.

“Many of you know I don’t come from a family that came up through politics. And so I have to thank each and every one of you for being there for me to show me the way.”

Buteas, who oversees an impactful NJBIA Government Affairs team that studies and determines positions on thousands of bills ever year, encouraged WPCNJ members and others in the audience at the Hyatt Regency to a be mentor to younger people as they try to find their path in government and in politics.

“It’s so important for us all to help one another and to lead and try to have others and follow in the footsteps of so many who have paved the way for all of us,” she said.

“My ask is to not only be a mentor for those who are coming up in government and politics but to really be their champion as well and be a phone call away. Because it’s really so important for us to all serve in that capacity.”

The Women’s Political Caucus of New Jersey is dedicated to increasing women’s participation in the political process, increasing the number of women in elected and appointed office, protecting reproductive freedom,  and creating a women’s political power base to achieve equality for ALL women.