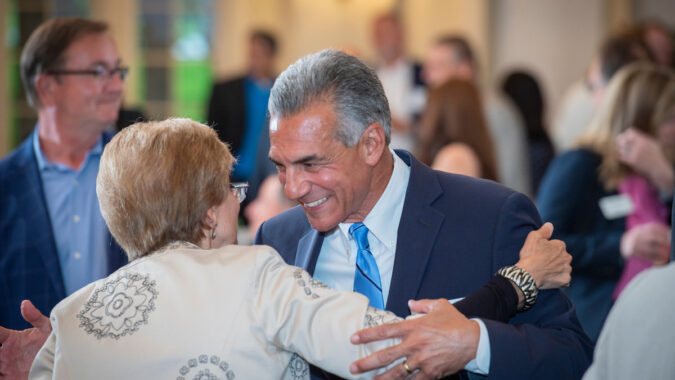 Throughout his gubernatorial campaign, Jack Ciattarelli said there was a pathway to become the next governor of New Jersey, despite long odds constantly cited by the polls.

But on Friday, he hit his final roadblock.

Ciattarelli, the moderate Republican and former assemblyman out of Somerset County, conceded the election to incumbent Gov. Phil Murphy  – 11 days after Election Day.

Speaking in Raritan just blocks from where his parents owned a restaurant, Ciattarelli also announced his plans to run again for governor in four years, based on the closeness of the election and the remaining issues at hand.

“For nearly two years, I traveled every corner of this state, engaging with New Jerseyans of every race, color, creed and religion, listening and discussing their concerns, talking about the issues that matter, kitchen table issues with common-sense solutions,” Ciattarelli said. “It was an exhilarating experience that I enjoyed immensely.

“But the state they love, the state I love, is broken. Adding to that frustration is political leadership that is out of touch with what needs to be fixed in New Jersey,” he said.

After holding a slim – and surprising lead – on the evening of Election Day, Ciattarelli now trails Murphy by 2.9% – approximately 74,000 votes – according to the Associated Press.

While he said he “hates to lose,” Ciattarelli took pride and comfort in seeing a near-historic Republican swing in the legislative election, with eight Assembly seats transferring from Democrats to Republicans and a shocking upset of Senate President Steve Sweeney against a political unknown named Edward Durr.

While stating his concession call to Murphy was cordial, wishing him luck in his second term, Ciattarelli consistently bemoaned New Jersey’s highest property taxes in the nation and what he called the “worst business climate in the country.”

On business, Ciattarelli ran on a platform that focused on the high cost of doing business in New Jersey that strikes at the state’s regional competitiveness.

Ciattarelli campaign ran on plans to help boost business, while helping them save. He pledged to reduce the corporate tax rate from national-high of 11.5% to 5% over five years; exempt the first $50,000 in small business income from taxes; eliminate taxes on the sale of a family-owned business; and reduce the income tax rate on the state’s highest earners by 30%.

“I want the governor to be successful in addressing the issues that are most important to New Jerseyans,” Ciattarelli said. “But I just have this feeling there’s going to be a lot of fixing to do come four years from now.”