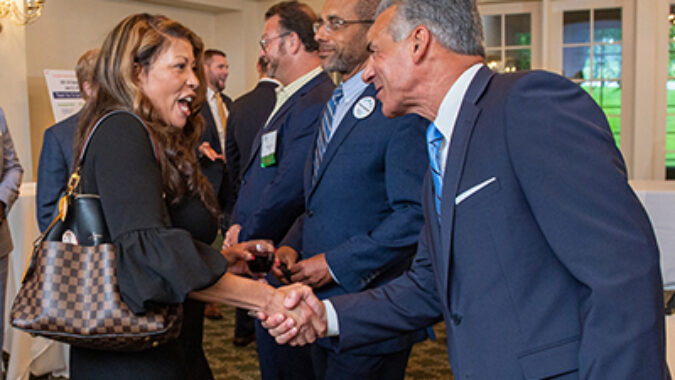 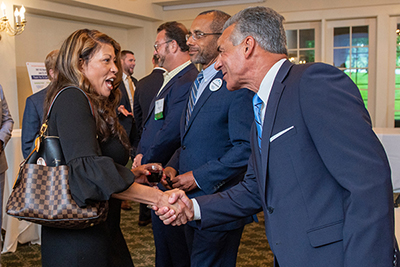 “As governor, I’ll become cheerleader in chief for the business community,” Ciattarelli said in a pre-taped interview shown to the more than 200 in attendance on Tuesday at Forsgate Country Club.

“It pains me greatly that year after year after year, New Jersey is ranked was one of the worst places in the country to do business. We can’t have that. It needs to change.”

Ciattarelli, the former assemblyman who ran and lost against Lt. Gov. Kim Guadagno in the Republican gubernatorial primary in 2017, said property taxes are at the root of the state’s affordability issues for both businesses and residents. He vowed to address them with a new school funding formula.

“We need a flatter and more equitable state aid for schools,” he said. “That’s the first steps to lower property taxes and that will be reflected in my very first budget.

“I believe we can do that without leaving any child or community behind, and without adversely affecting the quality of education,” he said.

When asked by NJBIA Chief Communications Officer Bob Considine if the property tax rebates currently proposed in the FY22 budget are relief enough, Ciattarelli said that was “temporary.”

“First of all, let’s give thought to allowing out-of-state providers to compete here in New Jersey,” he said. “I do believe competition makes us better in all kinds of ways, including making things less expensive.

“I was on Main Street. I employed 20-30 people at a time. I think it ought to be easier for all of the small businesses to aggregate their purchasing power. That’s not really the case today. Yes, there are some platforms out there – but they’re not easy. And I think that should be a way to lower health insurance, particularly for the small employer who really does want to offer health insurance.”

On making New Jersey more appealing to large businesses, Ciattarelli said he is more than intrigued by the notion of adopting Delaware General Corporation law, as Nevada did a decade ago.

On small business, Ciattarelli said Gov. Phil Murphy “has no appreciation for what Main Street means to the overall New Jersey economy.” Ciattarelli proposed the first $50,000 of business income be tax free because “of what the small business owners do to stimulate the economy.”

“That would also give them more capital to reinvest,” he said. “So, I’m all about some very significant changes to the tax code. Particularly, changes that benefit small businesses.”

On New Jersey’s regulatory burdens on business, Ciattarelli said there is much room for improvement.

“Here’s what I do when I sit down with any business sector: Give me three reforms that don’t necessarily screw the consumer, and that doesn’t hurt our environment,” he said. “And you’ll have me champion those reforms – if it makes our economy better and enables your business space to create more jobs.”