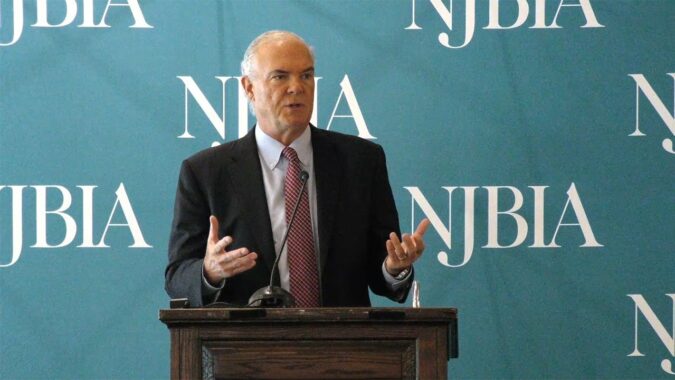 Modernizing the aging U.S. power grid, which has more than 600,000 linear miles of transmission lines, will be a gargantuan task that becomes even more urgent as the nation transitions to clean energy that increasingly relies on solar and wind energy to power homes and businesses.

Bob Martin, an expert in electric and gas generation, transmission, and distribution operations who is now managing director of Christie 55 Solutions, told more than 270 people at NJBIA’s recent energy summit that the nation’s existing high-voltage transmission capacity will need to triple by 2050 to support connections to renewable energy sources such as wind and solar. Citing a recent Princeton University study, Martin put the price tag of these upgrades at $2.4 trillion by 2050.

“When we talk about renewable energy … we also need to talk about the overall cost of what this takes to get the job done,” said Martin, who previously served as commissioner of the New Jersey Department of Environmental Protection from 2010 to 2018. “Given where we are moving on electrification across the country long-term, how do we invest in that?”

The federal infrastructure bill now pending in Congress is a “good jump-start,” Martin said because if enacted it would provide $73 billion to invest in power transmission improvements. Investor-owned electric companies, which are planning to spend $106 billion on transmission line construction over the next two years alone, will pay for much of the work ahead as well, he said. The private sector is investing in building out the offshore wind part and ratepayers will obviously bear some costs too, he said.

Martin stressed that improvements to the nation’s aging electric transmission grid, most of which dates to the 1950s and 1960s, are needed irrespective of the move to renewable energy sources in the future.

Power outages caused by aging electric infrastructure cost the U.S. economy $169 billion annually, he said, noting regional grids have not been able to withstand extreme weather events, such as Superstorm Sandy in New Jersey in 2012, the deep freeze in Texas earlier this year, and the California wildfires that have been sparked in some cases by aging transmission lines.

In addition, much of the nation’s transmission infrastructure was designed decades before cybersecurity became an issue so all aspects of the power system remain vulnerable to ransomware attacks that threaten to disrupt service to homes and businesses unless upgrades are made.

“Reliability, resiliency, and efficiency will be key drivers in the future whether we do renewable energy or not,” Martin said. “Those are factors we have to deal with and we’re going to have to make those investments.”

As the nation shifts to cleaner, more renewable energy sources, the Federal Energy Regulatory Commission (FERC), regional transmission operators, and states must provide leadership to ensure the investments being made by utilities, the private sector and government in the decades ahead are coordinated and effective in meeting renewable energy goals, Martin said.