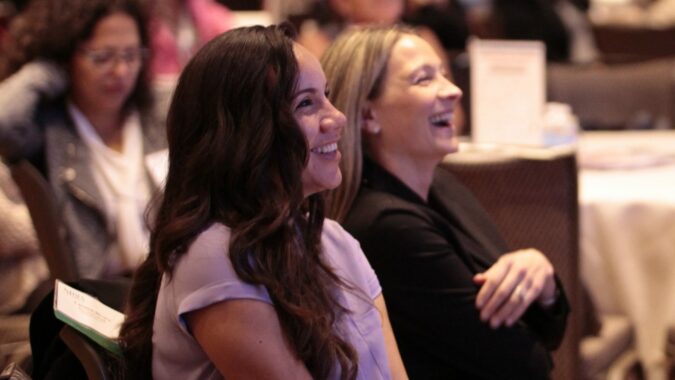 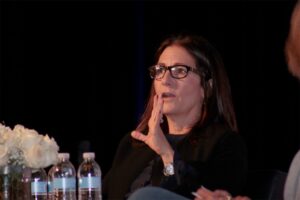 “Be open and trust yourself” may not be a formula for success for everyone, but for Bobbi Brown, the makeup industry and lifestyle entrepreneur, being open to things and doing what made sense to her played a big role in launching her successful career in the cosmetics industry.

At least that’s how it seemed at NJBIA’s Women Business Leaders Forum on Friday. Looking back on her 30-plus years in makeup, she says she didn’t spot the trends that made her successful ahead of time; she was just open to opportunities  and followed her heart and her gut.

She imparted these lessons and more to 500 business leaders in a relaxed Q and A format, with NJBIA President and CEO Michele Siekerka playing the role of talk show host.

Today, Brown is a cosme 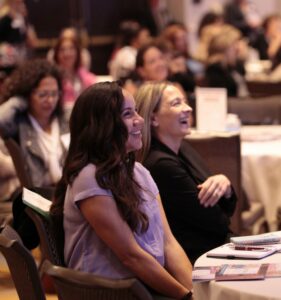 Bobbi Brown was entertaining as well as insightful.

tics industry titan, world renowned makeup artist and a best-selling author. And she is still creating. She recently launched a startup company, Beauty Evolution LLC, emphasizing overall wellness as the foundation of beauty.

Her big idea came in the 1980s. She was working as a makeup artist and the popular trends were something she thought was gaudy and out of place.

Still a professional makeup artist, Brown created 10 lipsticks based on what people’s lips actually looked like. She studied her friends, the models she worked with, their nannies and people around her to develop them, and she started selling them to friends and models.

Her big break came at a gathering at the house of someone she did not know. Being curious, she talked to everyone, one of whom was a woman who said she was a cosmetics buyer in a Bergdorf Goodman department store. That woman pitched Brown’s line of lipsticks, and the high-end department store took them.

“You just have to be open to who you meet and what happens,” Brown said.

Her brand quickly rose to No. 1 in both Bergdorf and  Neiman Marcus stores.  In 1995, she sold the brand to cosmetics giant Estee Lauder and became the company’s Chief Creative Officer, building a billion-dollar brand.

Listen to her tell the story, and you see that Brown  does not consider confidence to be hard to come by.  Confidence just means you’re comfortable in your skin, she said, and networking is just talking to people. She put that philosophy to work selling her lipsticks.  “There was no social media back then,” she said. “It was just:  I told someone, and someone told someone, and they liked it, so they told the next one, and it just kept going.”

She also emphasized honesty—to be able to say, “I’m not good at this,” or “I don’t know the answer.”

“A lot of insecurity comes when people pretend they’re good at something and they’re not,” Brown said. “That’s a power, to know what you’re not good at. And hey, guess what, you can find someone who is that you can bring in.”

For those just entering the workplace, her advice was old school: Arrive on time and play by the rules.

“All the things your parents taught you, bring them with you into your career,” Brown said. “And don’t be afraid to ask questions. If you don’t know something, it’s always better to ask than pretend you know. And do as much as you can for free.