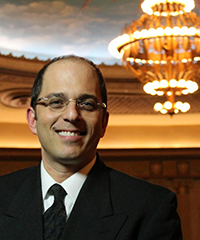 The Count Basie Center for the Arts in Red Bank generates around $24 million for the local economy in a normal year.

But as the restaurants that benefit from the historic theater were able to incrementally increase their capacities from 25% to 35% last week, the Count Basie still must maintain a cap of 150 for each of its two theaters as part of Gov. Phil Murphy’s executive orders.

“We are completely unable to survive at this capacity,” Adam Philipson, president and CEO of the Count Basie Center for the Arts, said during a New Jersey Business Coalition virtual town hall on March 18. “We have been hanging on for over a year.”

Philipson strongly maintained that the Count Basie has been able to put on more than 70 shows with very limited capacity during the pandemic, allowing more than 10,000 people into the recently opened Vogel Theater or its pop-up stage at the historic theater.

“CDC guidelines and health safety for patrons and staff are at the top of our list,” Philipson insisted. “And we take that so incredibly seriously. It’s important to know we’re not taking any of this for granted. We have not had one person sick who came to our venues.”

Due to indoor limitations, Count Basie has tried to pivot to survive over the past year. They put on eight outdoor “drive-in” shows – including a large Southside Johnny show at Monmouth Racetrack – that were attended by more than 5,000 cars, Philipson said.

He also accounted for 60 outdoor dinner club shows – when capacity was 500.

“We have learned both indoors and outdoors, that if we do this safely – which we do – and we follow CDC guidelines – which we do – that people can gather and consume the arts safely.

“What we know from the seemingly strange and random decisions of capacity that are being made, that this is not being guided by science. Because if this were scientific, then it would be systematic. We need 35%, at the minimum, no cap, where we would be right now, where our other colleagues are, for indoor.”

For outdoor, with social distancing and CDC guidelines, Philipson said, “there should be no cap.”

About 100 people, including state lawmakers, took part in the New Jersey Business Coalition’s third virtual town hall on how the COVID-19 pandemic has impacted schools and businesses.