NJBIA > NJBIA News & Opinion > Does Your Business Qualify for a $15 Minimum Wage Exception? 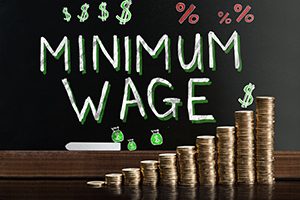 The first phase of implementing New Jersey’s higher minimum wage is officially less than two months away. Beyond that, however, some businesses will see their minimum wage requirements rise more slowly than most employers in the state.

Eventually, everyone will get to a $15 an hour minimum wage, attorney Laura Link explained to about 50 businesses in Cape May Court House on Wednesday, but when they get there can vary based on the type of business or type of employees they hire.

“There are some small carve-outs,” said Link, of Archer Law. “This isn’t a get-out-of-jail-free card, but there are a few employers that fit into exceptions for which the phase-in period will be longer. It doesn’t mean they’re not ultimately going to get to $15; it just takes a longer time to get there.”

These exceptions are for seasonal workers, farm laborers and small businesses.

The law defines small employer as a business with five or less employees. To qualify, you must have no more than five employees for the majority of the weeks of the current calendar year and no more than five employees during at least 48 weeks in the previous calendar year. For newly formed businesses, it’s  just the number of employees during the majority of the weeks in the current year.

While most businesses will have to pay at least $10 an hour on July 1, small employers and employers who employ seasonal workers can continue to pay such workers $8.85 until the end of 2019.  As of Jan. 1 2020, the rate will be at least $10.30 per hour for small and seasonal businesses instead of $11 per hour for everyone else. Here’s the rest of the phase-in schedule for these employers:

Businesses with tipped employees, like restaurants, will also be affected. In this case, however, in addition to phasing in the minimum wage increases, the law also phases in higher tip credits—the amount a restaurant can deduct from the minimum wage provided it is covered by the employees tips.

Note that the law requires all tipped employees must make at least minimum wage, even if the employer has to forgo some of all of the tip credit.

The law also allows for a training wage of 90 percent of the minimum wage for new employees.  Link cautioned, however, that some of the details could be tricky.

Employers can pay the lower wage for up to 120 hours for a new hire, provided the employee has no prior experience and is participating in a bona fide training program. The part that Link said makes her cringe is a requirement that the employer make a “good faith effort” to continue that employee’s employment after the training period.

“That is the whole point to a training period,” Link said. “This is when you find out if an employee is going to work out or not.” Letting an employee go during or right after the training program may catch the attention of the New Jersey Department of Labor and Workforce Development. If the department does not believe an employer is using the training wage properly, the department can suspend the employer’s right to use it.