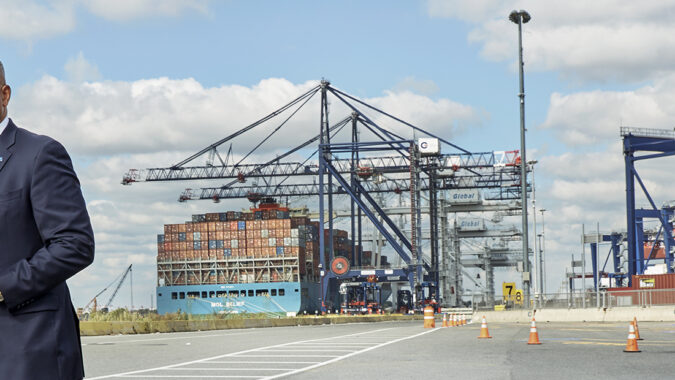 Several years ago, the ports of New Jersey were faced with a serious problem.

“The air draft clearance of the Bayonne Bridge was too low for the next generation of oceangoing vessels,” explains Jim Cobb, government affairs director for the New York Shipping Association, Inc. (NYSA). “Failure to resolve this would have resulted in the diversion of cargo by shippers to other ports and unnecessary economic hardship to many New Jersey citizens and people throughout the Northeast Region.”

The NYSA, a membership organization that represents the terminal operators, ocean carriers, stevedores and marine related businesses that operate the ships, move the cargo, and train and employ longshore workers in the Port of New York and New Jersey (PONYNJ), would team up with New Jersey Business & Industry Association (NJBIA) to tackle this problem.

And in 2013, the decision was made to raise the roadbed of the Bayonne Bridge 60 feet higher, allowing the new generation of cargo ships to pass through and reach all marine terminal operations in the port.

“By adding its respected voice to the call for action on this important economic issue, NJBIA aided the effort that ultimately resulted in Governor Chris Christie securing funding for the project,” Cobb continues. “On September 7, 2017, the largest container vessel in the history of the PONYNJ passed under the newly raised roadbed of the Bayonne Bridge, signaling the beginning of an unprecedented regional economic growth opportunity. Problem adverted! Jobs saved!”

The project helped secure jobs at the ports, which on any given day, is bustling with hundreds of workers operating various machinery and loading and unloading containers from cargo ships that sail from as far as Asia.

“The PONYNJ is the nation’s third largest seaport facility, and the largest seaport on the East and Gulf Coasts,” Cobb explains. “Ninety-one percent of the international maritime commerce which occurs in the PONYNJ occurs in New Jersey, making New Jersey the primary beneficiary. NJBIA’s collaboration was an important factor in securing the go ahead for this project and will have a major impact on the business climate in New Jersey for decades to come.”

“Around the state house, Jim is a well-recognized expert on shipping and port issues,” says Sara Bluhm, NJBIA Vice President of Environment & Energy. “He is always willing to help educate how policy proposals could impact the port region and the state.”

An NJBIA member since 2002, Cobb’s experience as an Aide for the NJ General Assembly and as the Director of Business Affairs for the NJ Department of Environmental Protection, provided him with the knowledge and understanding of the benefits NJBIA provides. “I learned about NJBIA while serving in state government,” he begins. “I was always impressed by NJBIA’s staunch advocacy on behalf of its members on issues that promoted economic growth and how well prepared NJBIA representatives were for various legislative committee and agency meetings. NJBIA has the best interests of the New Jersey business community in mind in everything it advocates.”

“The opportunity to work in collaboration with NJBIA’s talented business experts and professionals and those of its member companies, to promote economic growth and job creation in the state of New Jersey, made my decision easy,” says Cobb regarding joining the NJBIA. “NJBIA’s advocacy, high-level government contacts, networking opportunities, valuable information workshops, and genuine concern for the best interests of its members, is a proven formula for success for any business, small or large.”

Haled by Henry Hudson as the new center of world trade in 1624 when it was the Port of New Amsterdam, the PONYNJ has been able to sustain its position as one of the nation’s most vital seaports. Through the PONYNJ, NYSA members provide a variety of import and export services for the movement of containerized, breakbulk, and roll-on-roll-off cargo, as well as vacation cruise ship voyages for a broad spectrum of customers.

“Whether you operate a mom-and-pop corner store or a national chain of home improvement stores,” Cobb says, “NYSA members deliver the resources for your businesses to prosper, to and from anywhere in the world! We take the responsibility of the role they play – in delivering the goods for an enjoyable quality of life for the millions of people we serve – very seriously.”