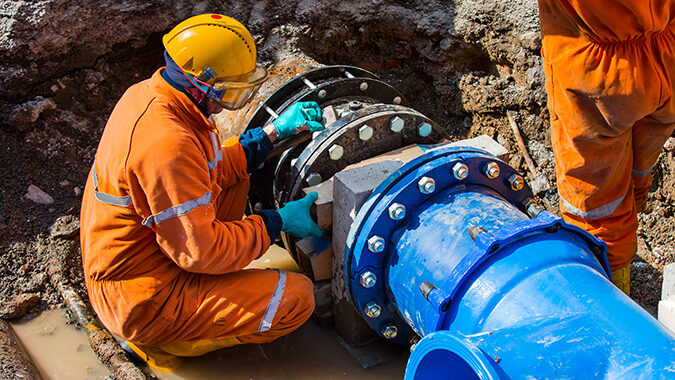 A coalition of labor, business and environmental groups is calling for an expanded investment in water infrastructure projects in New Jersey, which requires an estimated $26 billion over the next 20 years to pay for projects to safeguard drinking water, clean waterways and protect against flooding.

New Jersey is receiving $1 billion over the next five years from the new federal infrastructure law and should commit an additional $1.2 billion in funding from its share of the American Rescue Plan Act (ARPA) funds to pay for water infrastructure investments, according to leaders of the Clean Water, Healthy Families and Good Jobs Campaign.

New Jersey’s aging water infrastructure is costly, coalition officials said. Each day, 130 million gallons of treated drinking water are lost to leaky pipes. Last year, flooding resulted in hundreds of millions of dollars in damage and lead-contaminated drinking water has caused immeasurable damage to the health of children, especially in some of the state’s most vulnerable communities.

“This proposal builds on the solid steps taken by the Murphy administration and will make New Jersey a national leader in ensuring clean water for healthy, thriving communities,” added Chris Sturm, managing director of Policy and Water at New Jersey Future.

“The pipes that carry water to and from our homes and businesses are in bad shape,” said Dan Kennedy, senior director at the Utility and Transportation Contractors Association (UTCA) of NJ. “Kids in too many areas don’t have access to safe drinking water free from lead and chemicals like PFAS, and our sewers are outdated and over-capacity due to increased flow from increasingly extreme weather.”

The broad nature of this coalition – labor, environment, and business – speaks volumes about the need to accelerate investment in water infrastructure, said Ciro Scalera, director of Government Relations for the NJ Laborers Union Labor-Management Trust Fund. “Our members depend on clean drinking water just like everyone else, but more than that, this is an opportunity to grow high-quality jobs here in New Jersey,” Scalera said. “Making these investments is a win-win.”

Nicole Miller, principal consultant at MnM Consulting and co-chair of NewarkDIG (Doing Infrastructure Green) said water infrastructure investments are need across New Jersey, but critical in some communities that are especially vulnerable to flooding, lead in drinking water, and sewage-related overflows. “All families deserve affordable, clean drinking water and rivers and basements free of sewage,” Miller said. “New Jersey can use these funds to help build a healthier future.”

Barbara George Johnson, executive director of the New Jersey Urban Mayors Association and vice president of External Affairs and Urban Policy and Research at Kean University’s John S. Watson Institute, said cities are most impacted by aging water infrastructure. “Making a big, bold investment in water infrastructure demonstrates that there is value in our communities, improves health and shows a commitment to equity and justice for all New Jersey residents,” George said.

“Thousands of New Jerseyans are drinking water from dangerous lead pipes, sewer and waste systems often become overwhelmed and dump raw sewage into waterways and streets, and it’s estimated that one in five residents struggle to keep their tap on as rates continue to rise,” Levine said. “By tapping into American Rescue Plan funds now, New Jersey can super-charge generational investment in clean, affordable water for a healthier, more prosperous future.”

Ed Potosnak, executive director of the New Jersey League of Conservation Voters, agreed. “Governor Murphy and the state Legislature have an opportunity to make a historic investment in water infrastructure and demonstrate that New Jersey is a leader on one of the most important issues we face,” Potosnak said.

To learn more about the Clean Water, Healthy Families and Good Jobs Campaign and sign up as an endorsing member, visit www.ourwaternj.org.