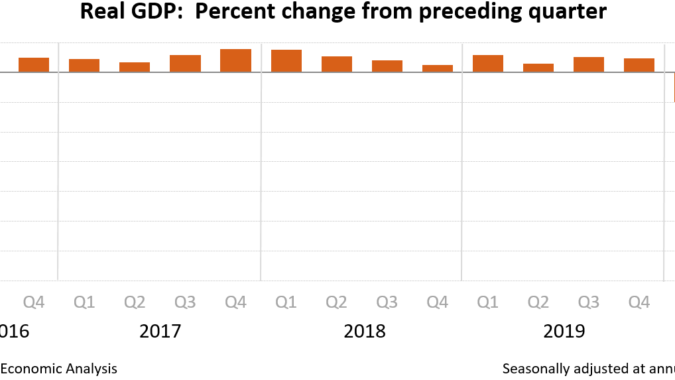 Real gross domestic product (GDP) decreased at an annual rate of 31.7 percent in the second quarter of 2020 (table 1), according to the “second” estimate released by the Bureau of Economic Analysis. In the first quarter, real GDP decreased 5.0 percent.

The GDP estimate released today is based on more complete source data than were available for the “advance” estimate issued last month. In the advance estimate, the decrease in real GDP was 32.9 percent. With the second estimate, private inventory investment and personal consumption expenditures (PCE) decreased less than previously estimated (see “Updates to GDP” on page 2).

Coronavirus (COVID-19) Impact on the Second-Quarter 2020 GDP Estimate
The decline in second quarter GDP reflected the response to COVID-19, as “stay-at-home” orders issued in March and April were partially lifted in some areas of the country in May and June, and government pandemic assistance payments were distributed to households and businesses. This led to rapid shifts in activity, as businesses and schools continued remote work and consumers and businesses canceled, restricted, or redirected their spending. The full economic effects of the COVID-19 pandemic cannot be quantified in the GDP estimate for the second quarter of 2020 because the impacts are generally embedded in source data and cannot be separately identified. For more information, see the Technical Note.

More information on the source data that underlie the estimates is available in the “Key Source Data and Assumptions” file on BEA’s website.

In the second estimate, real GDP decreased 31.7 percent in the second quarter, an upward revision of 1.2 percentage points from the previous estimate issued last month. The revision primarily reflected upward revisions to private inventory investment and PCE. For more information, see the Technical Note. For information on updates to GDP, see the “Additional Information” section that follows.

Updates to First-Quarter Wages and Salaries

In addition to presenting updated estimates for the second quarter, today’s release presents revised estimates of first-quarter wages and salaries, personal taxes, and contributions for government social insurance, based on updated data from the BLS Quarterly Census of Employment and Wages program. Wages and salaries are now estimated to have increased $103.6 billion in the first quarter of 2020, a downward revision of $3.4 billion. Real GDI decreased 2.5 percent in the first quarter, unrevised from the previously published estimate.

Profits from current production (corporate profits with inventory valuation and capital consumption adjustments) decreased $226.9 billion in the second quarter, compared with a decrease of $276.2 billion in the first quarter (table 10).