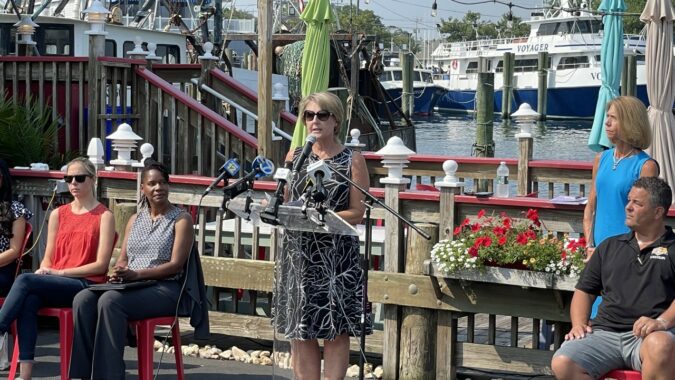 New Jersey’s lucrative summer season is at its midway point, but seasonal employers are concerned they won’t be able to maximize it.

Speaking at NJBIA’s Hiring Crisis press conference this week, Vicki Clark, Chair of the New Jersey Tourism Industry Association, said the runoff of limited staff many employers have will start sooner rather than later.

“Businesses predict losing yet another 20-30% of their staff by mid-August, with college students and high school students and teachers leaving their jobs or cutting hours to ready themselves for sports and the classroom,” said Clark, who is also president of the Cape May County Chamber of Commerce.

“This is right in the middle of the busiest month of New Jersey’s $22.3 billion shore tourism economy.”

She said New Jersey’s tourism industry is experiencing a robust rebound in 2021, “with our customers returning in huge numbers.”

But, she said, employees have not returned in ample numbers, and “businesses cannot handle the customer demand.”

“In 2021, our valued employees have not returned to work, forcing many businesses to cut hours, close portions of their operation, and some just shut down unexpectedly – disappointing customers who save all year long for their one trip to the shore,” Clark said.

“One business owner I spoke with told me his staff is already down 129 employees and this additional anticipated shortage will mean closing dining rooms and cutting hours of operation.

“A motel owner told me with tears in her eyes that she lost her only maid, which means cleaning her 20-room motel herself and doing all the laundry,” she said.

Clark also said the lack of available college students over the past 10 years has made businesses more reliant on the J-1 Visa Summer Work Travel program. But that program never fully materialized to its fullest this year.

For one employer, she said, this meant a delay in opening a new operation. Once it opened, the worker shortage caused “a lack of providing consistent table service, serving lunch mid-week and diminished revenue in the height of the season sufficient to carry them throughout the year.”

NJBIA held the Hiring Crisis press conference on Tuesday at Red’s Lobster Pot in Point Pleasant Beach to advance steps Gov. Phil Murphy and the Legislature could be taking to help ease the problems.

NJBIA President and CEO Michele Siekerka said the state’s COVID-19 relief efforts to help small businesses survive the pandemic are appreciated, including the $135 million in small business loans signed by Gov. Murphy last week. However, more must be done to entice people to return to work now, they said.

The state, she said, needs to start enforcing rules requiring the unemployed to be actively seeking work to continue collecting unemployment benefits. She and others also called for employer tax credits to help financially strapped businesses pay for the wage increases and employee cash incentives required in a tight labor market just to stay open.

Siekerka also said the governor should message to the public that if people are able to go back to work, they should go to work.

“We must reward and encourage our employees to return to work,” Clark added.