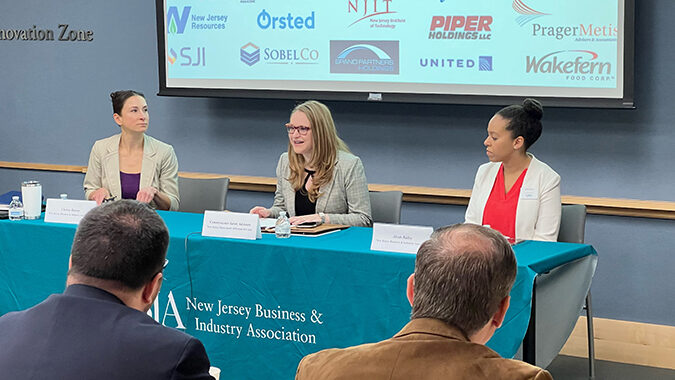 This morning, Commissioner of the Department of Human Services Sarah Adelman participated in an NJBIA Meet the Decision Makers event in which she spoke about key investments being made by the department, including wage increases for direct support professionals and more than $700 million to support various aspects of the childcare sector.

“Childcare is a centerpiece of our economy and our economic recovery,” Adelman said, explaining that the governor’s budget plan includes the continued implementation of more than $700 million in federal investments to help parents pay for childcare, provide higher pay to childcare workers, and increase support for childcare providers over the next two years.

“The department has invested $200 million to help parents reduce their childcare expenses and put dollars back in the pockets of working families,” she continued. “A single parent with one child in care is saving more than $700 a year. And we’ve issued more than $30 million for bonus pay to more than 30,000 childcare workers.”

The department has also approved $180 million in new stabilization funds for nearly 3,000 childcare centers and providers across the state, which aim to help with operational expenses.

In total, over the past two years, the department has delivered more than $1 billion in childcare assistance, injecting aid to a sector which keeps the state’s workforce operational.

In fact, in the latest national survey of direct support professional wages, New Jersey is among the top five states for pay and among the top three states with the lowest turnover rates.

Adelman predicts that the state will continue to lead the way in caring for individuals with intellectual and developmental disabilities.

The department has also made numerous investments in other areas including food assistance, enhanced services for older adults and individuals with disabilities, protected health coverage for more than 2 million residents, and expanded access for those needing mental health and addiction services.

“The high cost of  healthcare remains a deterrent for too many families. This blueprint — created by bringing together healthcare leaders, businesses, and consumers — serves as a guide and our collective commitment to control cost growth, including state costs in our Medicaid program, to ensure more affordable care for New Jersey families,” Adelman said. “We have more great work to do, and I look forward to getting it done.”