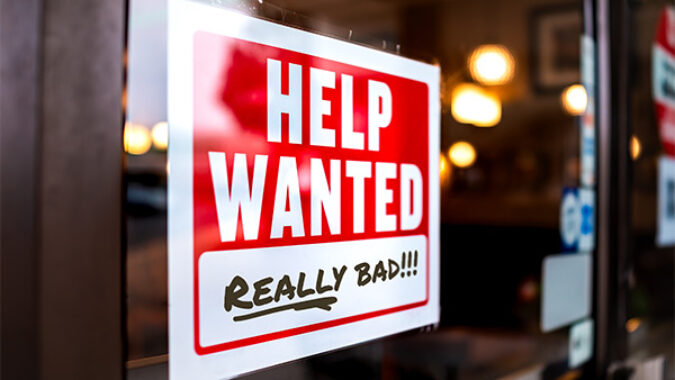 After speaking at a Burlington Mercer Chamber event at Mastoris Diner in Bordentown this week, NJBIA President and CEO Michele Siekerka took feedback from the president of the restaurant who offered anyone in the crowd a free dinner if they could get someone to work for him.

With growing stories of workers continuing to live off unemployment checks or stimulus payments, he is far from alone in voicing his frustration.

“You’re coming off the worst year you could possibly have in a business, but you’re excited because capacity is increasing gradually and the sky is blue,” explained Roger Price,  president of Mastoris. “The problem is you can’t get anybody to work for you because they’d rather sit home and collect a check.

“We’re open with limited capacity, but I still have people waiting in lines because I don’t have enough employees. It’s enough with the stipends. You have to put people back to work.”

New Jersey has distributed $26.9 billion to New Jersey workers since the arrival of the pandemic in early 2020.

On Thursday, the New Jersey Division of Labor & Workforce Development announced that the state will no longer be eligible for an extended unemployment benefit program after its unemployment rate dropped below 8%.

However, claimants will still be eligible for the federal Pandemic Emergency Unemployment Compensation fund, which runs through Sept. 4.

“This is definitely a tough time for small business employers, particularly in the restaurant industry,” Siekerka said. “We’re hearing more and more about these business owners who are really trying to incentivize people to come back to work, especially as there are more vaccinations and looser restrictions on the horizon.

“And in raising what they need to pay to compete with what might be a low motivation to work, their profit margins also take a cut.”

For example, if a company typically pays $12/hr for a worker, but now needs to pay $17/hr to be competitive during a time when unemployment checks are being offered, a government program temporarily paying that added $5/hr per employee could help – or a tax credit of equal value.

NJBIA has also encouraged the idea of an online portal with the state DOL where employers could report “refusals to work,” as found in other states.

For his part, Price has started an employee referral program. He offers a worker $300 if they can bring in another worker.

“You also pay tons of money on the traditional ways of recruiting people,” Price said. “I have ads everywhere, but you literally get zero responses.”

Mike Jurusz, executive chef and owner of Chef Mike’s Atlantic Bar & Grill in South Seaside Park, is also offering “finders fees” to employees, while hoping to attract workers who like to work in a beach atmosphere. He offers free food and post-work cocktails for age–appropriate workers. But he is still having great challenges in finding workers.

“These people are brutally honest with you,” Jurusz said. “They want you to match whatever they’re getting from the government in a cash payment, off the books, in order to come to work for you. So basically they want to double dip –  steal from the government while the government keeps giving them money. It’s crazy.”

Price and Jurusz said workers should realize they will make more while working, rather than collecting and not working.

“What blows my mind is at a place like mine, a server on average could make $25 to $35 an hour – not a bad job,” Price said. “But it just seems like the mentality of people right now is they don’t want to work.”