Now in its third year, New Jersey’s bipartisan Manufacturing Caucus is contemplating an agenda of more than 40 bills, many of which focus on key issues like job training programs, excessive government regulation and economic incentives. 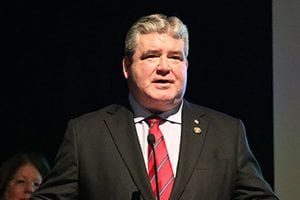 Senator Steven Oroho, co-chair of the bipartisan legislative Manufacturing Caucus, speaks to manufacturers at the State of Manufacturing event in Trenton on March 25.

The caucus co-chairs—Sen. Linda Greenstein and Sen. Steve Oroho—told manufacturers at the War Memorial in Trenton on March 25 that they appreciated their contribution to the economy. As Greenstein put it, the caucus was created to provide manufacturers with the tools they need to “thrive in our state, and very importantly, to stay in our state.  We don’t want you to leave.”

Most of the 40 bills support at least one of four basic goals, Greenstein said—improving workforce development, supporting the innovation eco-system and infrastructure improvements, reducing burdensome overregulation and lowering the cost of doing business.

She noted that the state’s main business incentive program, the Economic Opportunity Act, will expire on July 1, and said the caucus was working on a new plan that will focus incentives on small and medium-sized companies that have the greatest potential for job growth.

Oroho talked about the caucus serving as a catalyst for change in regulations, much as the Red Tape Review Commission did in the past. Regulations also impact businesses and these often get overlooked.

”The caucus wants to bring together businesses, industry groups and legislators to address areas where regulations go too far,” Oroho said, adding that he hopes the governor’s office and the departments would be on board as well.

“We want to be able to identify if it’s something that is regulatory, that the administration can take care of quickly, or is it something that’s statutory that the Legislature has to pass a law,” he said.

“Some of you refer to regulations as red tape, but really, the issue here is how do you navigate very complex—and I would say over-complex—system,” Greenstein added.

Among the legislation supported by the Manufacturing Caucus is the Securing Our Children’s Future Bond Act, which was approved by voters last year. The funding from that act will provide capital for vocational-technical schools and help fill jobs in need for manufacturers. The caucus also has supported a host of apprenticeship bills.