On Feb. 4, 2019, Gov. Phil Murphy signed A-15, which set New Jersey on the path to raise the minimum wage in increments to $15 an hour by 2024. The law raised the minimum wage to $10 per hour on July 1, 2019 and then to $11 per hour on Jan. 1, 2020. Currently, the minimum wage is set to increase $1 every year until reaching $15 per hour in 2024. The minimum wage will increase at a slower rate for small businesses with six or fewer employees, seasonal businesses, and farm labor. The bill also effectively increased tipped workers’ minimum wage rates and increased the training wage. On Aug. 3, 2020 the Department of Labor and Work Force Development issued new rule adoptions. This Fast Fact helps employers understand when and how these changes are coming, and in what ways they will be affected.

Between 2008 and 2016, legislation to increase New Jersey’s minimum wage was introduced five times without success. Three years after former Gov. Chris Christie vetoed the 2016 bill to raise the minimum wage to $15 per hour, a similar bill was signed by Governor Murphy, fulfilling one of his priority campaign promises. New Jersey has joined California, Connecticut, Washington D.C., Illinois, Maryland, Massachusetts, and New York in enacting pathways to a $15 per hour minimum wage.

When does each wage increase take effect?

For tipped workers, employers who take the tip credit are required to pay their employees a minimum hourly wage equal to the difference between the regular minimum wage rate and the tip credit taken by the employer. Listed above are the maximum tip credits employers can claim each year, which cannot exceed the value of tips actually earned by employees.

Individuals exempt from the minimum wage rates are:

Is there a training wage?

An employee may be paid the training wage of not less than 90% of the regular minimum wage for the first 120 hours of work in an occupation in which the employee has no previous similar work experience. Training wages can be paid to individuals participating in an established employer on-the-job or other training program, defined as a program that provides the employee an industry-valued training credential or a credit that can be applied to earning an industry-valued training credential.

How are tipped employees defined?

A seasonal employer fits at least one of these definitions:

How is small employer defined?

Wage order regulations can be found on the DOLWD website. If you need additional information, please contact NJBIA’s Member Action Center at 1-800-499-4419, ext. 3 or member411@njbia.org. 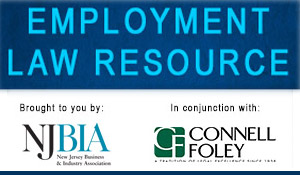