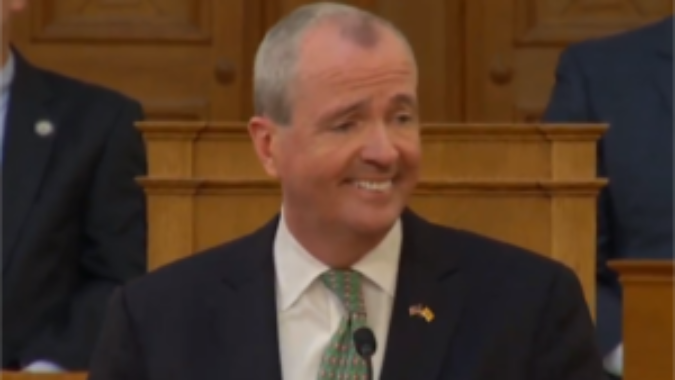 Gov. Phil Murphy today proposed a $38.6 billion budget that again raises spending and increases taxes even as it boasts more than a $1 billion in savings.

The plan, outlined in the Governor’s annual budget address, would cut $1.1 billion in costs, including nearly $800 million in public employee health benefit cost savings and another $200 million-plus in departmental savings. It would also end with a surplus of more than $1 billion.

Murphy talked at length about investments in NJ TRANSIT and education, and talked extensively about protecting the middle class.

He did not mention tax increases directly in his remarks, referencing only applying the “millionaires tax to all millionaires.”  His proposed budget would lower the threshold on the top income tax rate from $5 million to $1 million, effectively increasing taxes from 8.97 percent to 10.75 percent for people making between $1 million and $5 million. He is also counting on revenue from the legalization of marijuana as well.

A new revenue raiser is what the administration is calling a Corporate Responsibility Fee. It would charge businesses $150 per employee for large employers with more than 50 employees relying on Medicaid for healthcare. “This fee will incentivize employers to provide benefits, and ensure that everyone pays their fair share for the Medicaid coverage that taxpayers support,” according to the administration’s description.

For business, the budget is more of the same: higher taxes  and more government spending. NJBIA is especially concerned about the long-term effects of increased spending. As it is, New Jersey revenues are not covering what the state spends now.  As NJBIA’s analysis, “New Jersey’s Financial Cliff,” showed, New Jersey’s debt obligation has grown 382 percent over the past 10 years while revenues have only grown 23 percent.

“We can no longer wait to take a broader view at top-line reforms, as articulated in the New Jersey Economic & Fiscal Policy Workgroup’s Path to Progress report,” NJBIA President and CEO Michele Siekerka said in a statement following the address.

She also criticized the plan for its impact on the business community.

“Today’s proposal will not improve the outlook for New Jersey businesses, which saw tax increases and a wave of costly mandates over the past year that collectively strike hard at profit margins and overall competitiveness,” she said.