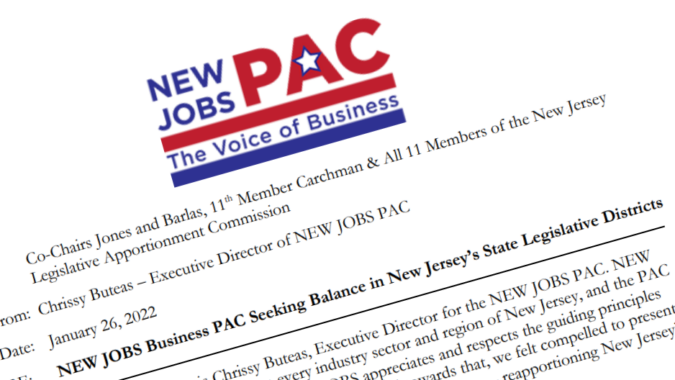 The NEW JOBS PAC has submitted a letter to the New Jersey Legislative Apportionment Commission urging the need for balance on behalf of New Jersey’s business community as it draws the lines of the state’s 40 legislative districts.

“To avoid leaving the state as an outlier when evaluating our state’s overall economy, strong policymaking is critical, so New Jersey is better positioned to be a leader in all areas of public policy, from innovation to education to infrastructure.”

Buteas said in order to achieve better balance in New Jersey’s legislative districts, the Commission should have the simultaneous goals of:

“Those districts are evidence that legislators in competitive districts have often brought more balance and moderation,” Buteas said.

Legislative redistricting must be undertaken at the beginning of each decade to account for population changes that occur during the previous decade within the geographic boundaries of New Jersey. The purpose of redrawing the districts is to ensure equal democratic representation among the members of the population as nearly as practicable.