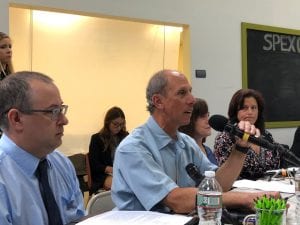 Gary DuBoff of Arrow Fastener Company testifies before the Legislative Manufacturing Caucus on the impact of tariffs on his business.

New Jersey manufacturing companies told a bipartisan legislative committee on Tuesday that the new federal tariffs on aluminum and steel are bad for business.

“The tariffs for us have been a nightmare,” said Gary DuBoff, CEO of Arrow Fastner Company of Saddlebrook. DuBoff said the banded wire his company needs to manufacture staples is no longer made in the United States and the federal government has denied all six of his tariff exemption requests for the galvanized and stainless steel banded wire he imports from China.

Ironically, DuBoff said, his competitors can purchase already made staples from China and not be subject to the tariff.

“So we could go overseas, buy completed staples, ship them here, pay no tariff and lay off the 350 people we have in our plant—someone needs to explain to me how this makes any sense at all,” DuBoff said. “We’re doing everything we can to keep jobs in New Jersey and it’s become more difficult every day.”

The criticism came at the Legislative Manufacturing Caucus’ hearing, held at the Metuchen company SPEX CertiPrep, an NJBIA member that manufactures laboratory equipment used in analytical spectroscopy by the scientific community. The bipartisan legislative caucus, chaired by Sen. Vin Gopal, D-11, has been holding hearings throughout the state to hear directly from manufacturers about the challenges their businesses face in the global marketplace.

Manufacturing in New Jersey is a $45.9 billion industry that employs more than 258,000 workers. Tuesday’s hearing was convened to hear directly from New Jersey manufacturers about the impact that federal tariffs on aluminum and steel are having on their businesses.

Other NJBIA members who testified about the adverse effects of the tariffs were Marcia Frieze, CEO of Case Medical, Inc. in South Hackensack; Gail Friedberg, SVP of ZaGo Manufacturing in Newark; and Jim Minadeo of Zero Surge in Frenchtown.

“From our perspective, tariffs are just taxes by another name,” said Friedberg. “This is money that goes directly to the federal government and becomes part of our expenses,” she said.

Beyond the increase in costs, the tariffs are also affecting the supply chain, the manufacturers said. The automotive and aircraft industries are hoarding existing supplies of aluminum and steel in the U.S., leaving smaller manufacturers scrambling to find the materials they need for their processes.

“I was willing to swallow some of the increased costs, but my main concern is supply,” said Frieze, of Case Medical, which manufactures medical equipment made primarily of aluminum and stainless steel.

Although the manufacturers at the legislative hearing were critical of the tariffs, NJBIA’s recent survey of all members, including manufacturers, found a mixed response.

When asked if tariffs on certain products from China were impacting their bottom line, 41 percent yes and another 22 percent they will if the tariffs continue. More than 64 percent of those who responded yes said they are raising prices to counter their increased costs.

Results were more guarded when asked if tariffs on products from Canada and/or Mexico were impacting their business. More than 37 percent said no, while 32 percent countered yes and another 23 percent said not yet, but anticipated they would should the tariffs continue.

Specific to whether tariffs on foreign steel and aluminum are negatively impacting their business, 44 percent of respondents said yes, 36 percent said no. Another 19 percent said increased prices on the metals did not apply to their business.

Members were also asked to what best describes their feeling toward increased tariffs imposed by the Trump administration this year: