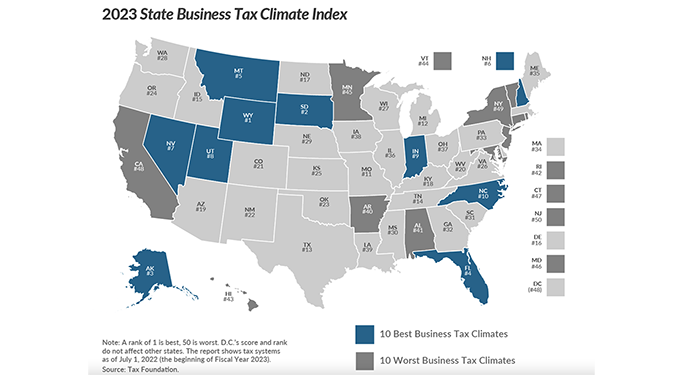 For the sixth year in a row, New Jersey’s tax system is ranked as the worst in the nation by the independent Tax Foundation’s annual State Business Climate Index, which compares the tax systems of all 50 states to determine which are the most hospitable to business and economic growth.

“The states in the bottom 10 tend to have a number of afflictions in common: complex, nonneutral taxes with comparatively high rates,” Vice President of State Projects Jared Walczak and Policy Analyst Janelle Fritts wrote in their analysis for the Tax Foundation’s 2023 State Business Climate Index released Tuesday.

“Additionally, the state has a particularly aggressive treatment of international income, levies an inheritance tax, and maintains some of the nation’s worst-structured individual income taxes.”

“The absence of a major tax is a common factor among many of the top 10 states,” the authors said. “Property taxes and unemployment insurance taxes are levied in every state, but there are several states that do without one or more of the major taxes: the corporate income tax, the individual income tax, or the sales tax.”

“The evidence shows that states with the best tax systems will be the most competitive at attracting new businesses and most effective at generating economic and employment growth,” the authors wrote. “It is true that taxes are but one factor in business decision-making. Other concerns also matter – such as access to raw materials or infrastructure or a skilled labor pool – but a simple, sensible tax system can positively impact business operations with regard to these resources.

“Furthermore, unlike changes to a state’s healthcare, transportation, or education systems, which can take decades to implement, changes to the tax code can quickly improve a state’s business climate.”

State policymakers should be aware of how their states’ business climates stack up against their immediate neighbors and to other regional competitor states, the Tax Foundation said.

Although New Jersey’s neighbor New York finished at No. 49, just one spot ahead of the Garden State in tax competitiveness, Pennsylvania and Delaware finished significantly better at No. 33 and No. 16, respectively.

The Tax Foundation’s report compared tax systems as of July 1, 2022, which is the start of the 2023 fiscal year for state budgets. Some states have already made significant changes to their tax systems that will take effect in the months ahead, which are not reflected in the current rankings.

“Under legislation paired with the state budget, Pennsylvania will reduce the corporate net income tax rate from 9.99 percent to 8.99 percent on Jan. 1, 2023,” the authors said. “Each year thereafter the rate will decrease 0.5 percentage points until it reaches 4.99 percent at the beginning of 2031, transforming the nation’s second-highest corporate income tax rate into something much more competitive.”