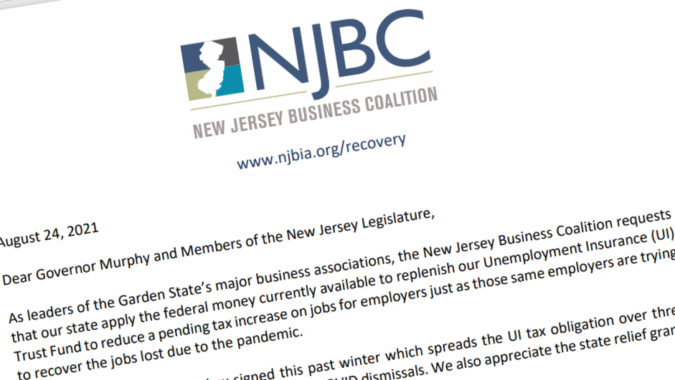 The New Jersey Business Coalition this week sent a letter to Gov. Phil Murphy and the Legislature urging the state of New Jersey to apply federal recovery money currently available to replenish the state’s Unemployment Insurance (UI) Trust Fund, as many other states have done.

Nearly 100 business, trade and nonprofit associations said in the letter that the same employers being hit with the increase are also trying to recover jobs due to the pandemic.

“Depositing some of the state’s portion of the American Rescue Plan Act (ARPA) funds or remaining CARES Act funds into the UI fund can help businesses invest in their company and workforce with COVID safeguards, increase wages to respond to the hiring crisis, rehire after COVID layoffs, and recover revenue lost during the pandemic,” they wrote.

“Otherwise, employers will have to divert substantial resources to cover the approximately billion-dollar UI tax increase spread over three years despite the fact that the mass layoffs were not of their doing and only necessary due to the unprecedented pandemic and state-mandated COVID-19 restrictions on businesses.”

Last winter, Gov. Murphy signed a law that would allow the estimated $1 billion tax increase to be assessed on businesses over three years. By statute, the state Department of Labor published the first phase of that tax increase, for FY22, on Aug. 13.

But the coalition noted in its letter that the law determining the tax increases in FY23 and FY24 includes an exception if the fund is in better health than the UI tax column dictated by the new law.

“Therefore, we implore you to deposit enough money in the fund by March of 2022, when the health of the fund is next assessed to reduce and/or even eliminate the potential tax increases in year two and three of the three-year phase-in.”

The groups also said the three-year tax phase-in and the March assessment “are statutory constructions that can be changed by the Legislature and Governor and should not be an excuse for inaction.”

“We request you take action now to soften the tax increase due by this October 30 for these employers who are still grappling with the lingering impacts of COVID-19 and cannot afford a tax increase on each person they employ,” they wrote.

The requested action of Gov. Murphy and the Legislature to use federal funds to reduce or eliminate the massive tax increase on business has also been echoed by New Jersey lawmakers on both sides of the aisle over the past two weeks.