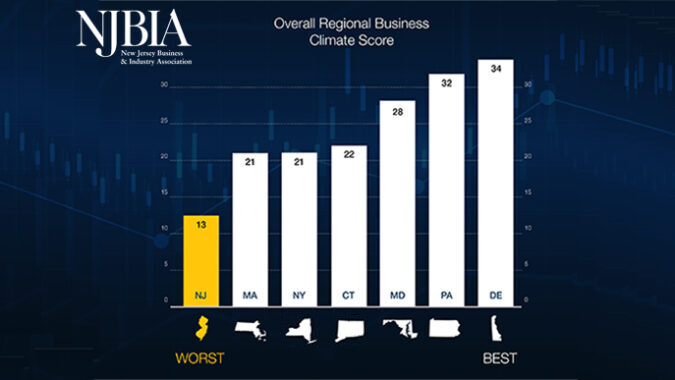 As part of its recent budget testimonies provided to the Legislature, NJBIA has released its updated 2022 Regional Business Climate Analysis showing New Jersey continues to significantly trail the rest of the region in business climate.

The analysis shows New Jersey is maintaining the highest corporate business tax rate, state sales tax rate and property tax paid as a percentage of personal income, as well as the second highest top income tax rate, in the region.

The two-page graphic can be found here.

“As we go through the budget season, it’s important that our policymakers understand how much of a regional and national outlier New Jersey is in terms of taxes and the cost of doing business,” said NJBIA President & CEO Michele Siekerka.

“We all know and appreciate the current attention paid toward affordability. But for businesses – particularly our smaller businesses that faced the longest shutdowns and restrictions in the nation during the pandemic and are also facing $1 billion in unemployment tax increases over three years – there is still a long way to go to bring them affordability.

“For the sake of our competitiveness and the health of our businesses, we should all be looking at this data and asking why New Jersey must be such an outlier with our taxes and seeking comprehensive solutions and reforms during the budget season to improve our business climate.”

Another metric in the analysis observes the Tax Foundation’s National Unemployment Insurance Tax Ranking, which accounts for the UI tax rate, taxable wage base and other factors. Massachusetts is ranked 50th in the nation in this category, while Delaware is ranked third best nationally. New Jersey is ranked 32nd overall in this category.

Instead, the 2.5 percentage point surcharge was extended by the Legislature in 2020 until the end of 2023.

“Out of the proposed $48.9 billion budget for FY23, only 0.1% will go toward relief for small businesses that are leasing new space or adding capital costs,” Siekerka added. “There really is no tax relief of any kind for businesses in the budget or part of the ANCHOR Property Tax relief program.

“When seeing the cost of doing business here in New Jersey, and another $1 billion in UI tax increases over three years, we hope our policymakers understand they could be and should be doing much more to help our businesses.”