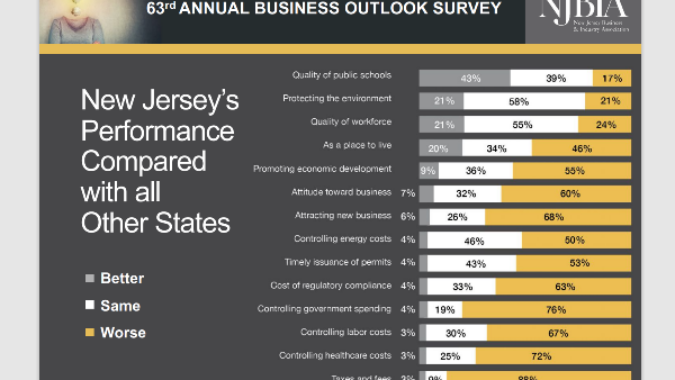 NJBIA released its 63rd annual Business Outlook Survey on Nov. 30. While much of the attention of the 2022 outlook survey focused on hiring challenges and employer morale, there were many other facets of the survey.

Today, we look deeper at how members feel New Jersey competes with other states on multiple metrics. We also share the economic outlooks for both the Garden State and the United States in 2022.

New Jersey’s Competitive LevelsNew Jersey’s performance compared to other states was fairly similar to past years. However, New Jersey’s workforce issues in 2021 changed one key metric.
Specifically, only 21% of respondents said that the quality of New Jersey’s workforce was better than other states – an 8% drop from last year and the year before. That decline could be indicative of employers forced to take less qualified workers to fill positions, or perhaps a commentary on those who chose to receive unemployment benefits rather than re-entering the workforce.
The leading competitive positive: For the second straight year, 43% rate the quality of New Jersey public schools better than other states. At protecting the environment, 21% said New Jersey does better than other states – a 2% bump from last year’s survey.
But New Jersey continues to struggle in many areas more tied directly to business. It was listed as worse that other states in taxes and fees (88%), controlling government spending (76%), controlling health care costs (72%), controlling labor costs (67%) and the costs of regulatory compliance (63%).
NJ and US Economic Outlooks In 2021, most (42%) rated New Jersey’s economy as fair, while 29% described it as poor, 25% listed it as good and only 3% called it excellent. These numbers are somewhat improved from the pandemic-laden year of 2020.
But when asked how New Jersey’s economy will fare in the first six months of 2022, only 22% reported it would be better, while 44% said it would be worse.
That -22% net outlook is 10 percentage points lower than the outlook for 2021.
There were bigger changes, however, in the outlook for the U.S. economy. Only 26% said the first six months of 2022 would be better, compared to 41% who said it will be worse. That’s a -15% net outlook for the national economy, likely impacted by inflation, supply chain issues and concern of increased taxes.
That’s also the lowest net outlook for the U.S. economy in this survey since 2012 (-29%).
NJBIA 2022 Business Outlook Survey
Research
More Research