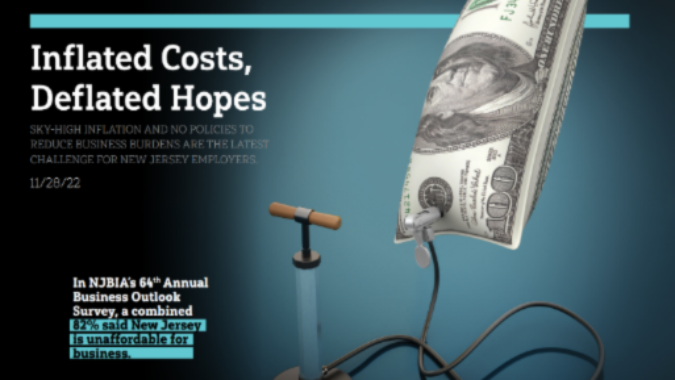 Today, we look at deeper at New Jersey’s challenges and competitive levels found in this year’s Business Outlook Survey.

NJ Challenges
For the second straight year, the overall cost of doing business was listed as the most troublesome problem for New Jersey businesses – with 25% listing that as tops among their Top 4.

Health insurance costs, which used to be listed as a perennial top problem, climbed back to the No. 2 spot with 16%. Availability of skilled labor (14%) was listed as the third top problem, while property taxes, which held the unenviable top spot from 2017 to 2020, is now fourth (11%).

Seventy-four percent of respondents said they expect their health benefits costs to go up in 2023. Of those, 21% anticipated those health benefit costs to rise 11% or more in 2023.

As for local property taxes, 61% expected an increase, 37% expected them to remain the same, and only 2% expected a decrease.

NJ’s Competitive Levels
This is typically a section of the survey where the state struggles, but there were some bright spots to be found.

Another notable positive: 28% said the quality of New Jersey’s workforce was better than other states. That’s up 7% from last year, when businesses were more apt to take less qualified workers to fill open positions.

Last year, 46% said New Jersey was a worse place to live than in other states. However, in 2022, that number went down to 32% – a notable improvement.

New Jersey, however, continues to struggle in many areas tied more directly to business. It was listed as worse than other states in taxes and fees (83%) and controlling government spending (74%) – the latter of which may directly be tied to a $50.6 billion state budget for FY23 that is now 41% higher since Gov. Murphy took office in 2018.