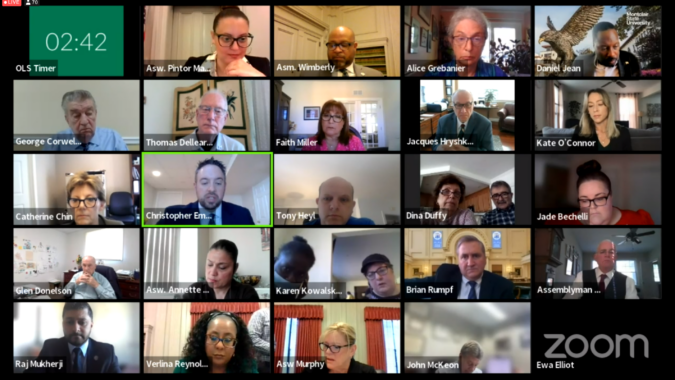 NJBIA welcomed a proposed FY23 State Budget that does not include any new taxes and makes a full pension payment, but strongly cautioned that New Jersey’s rate of spending is unsustainable, and much more can be done to help New Jersey businesses.

In testimony before the Assembly Budget Committee today, NJBIA Vice President of Government Affairs Christopher Emigholz said the $48.9 billion budget is the largest in state history and has grown more than 5% since the budget signed nearly nine months ago and 41% over Gov. Phil Murphy’s five budgets.

Emigholz said that level of spending is “unsustainable,” with FY23 appropriations exceeding revenue by $1.7 billion.

“Budget sustainability often becomes an affordability issue, because an unsustainable structural imbalance has a nasty way of becoming sustainable through tax increases which our taxpayers just cannot afford,” Emigholz said.

“An unsustainable budget is not affordable.”

Emigholz also noted that the budget is lacking an appropriate amount of direct relief for New Jersey businesses. There is a $50 million appropriation for the Main Street Recovery Finance Program – which represents only 0.1% of the state budget. However, that funding is only for smaller businesses that are leasing new space or adding capital costs.

“To make New Jersey more affordable to do business in, additional relief is needed for all businesses, whether that comes in the form of tax relief or further pro-business spending,” Emigholz said.

Emigholz also noted that the new ANCHOR property tax program, which will provide $900 million in property tax relief to homeowners and renters in FY23, excludes New Jersey businesses – even though they pay nearly half of the state’s property taxes annually.

As a result, NJBIA is advocating for bill S-330 (Scutari, D-22; Singleton, D-7) to become part of the budget conversation with the Legislature, as it would help reduce property taxes for residents and businesses by increasing distribution to municipalities from the Energy Tax Receipts Property Tax Relief Fund. The bill has already passed the full Senate unanimously.

Another bill Emigholz added support for is bill S-733 (Madden, D-4, Singleton), which would simultaneously save employers more than $300 million in unemployment insurance tax increases, as well as pay off a federal UI loan to avoid any unnecessary interest payments.  The bill already unanimously passed the Senate Labor Committee.

New Jersey businesses are on the hook for nearly $1 billion in UI tax hikes over three years to replenish the state’s Unemployment Insurance Trust Fund.