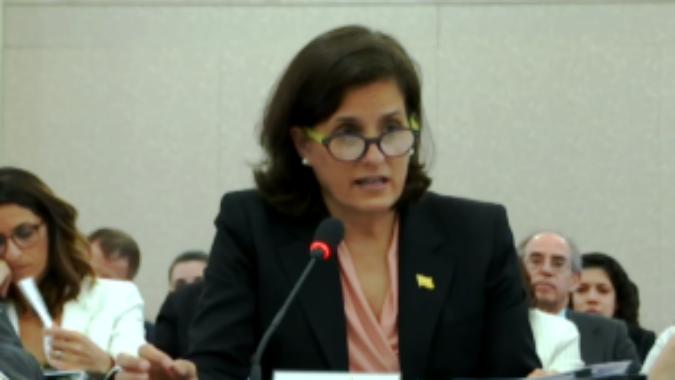 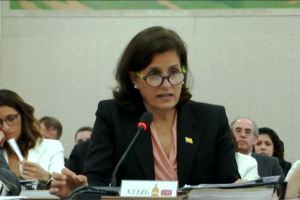 State Treasurer Elizabeth Maher Muoio provides an update on state revenues to the Senate and Assembly budget committees on May 14.

Treasurer Elizabeth Muoio is right about New Jersey needing a much bigger surplus than the one being proposed right now. But the same analyst she cited in support of her position also has suggested that raising the millionaires tax is the wrong way to go, the New Jersey Business & Industry Association said this morning.

“NJBIA agrees with the Treasurer that New Jersey should have a much bigger surplus than it has now, and the one being proposed by the Murphy administration is the largest we’ve had in a long time,” said Andrew Musick, NJBIA vice president for Government Affairs. “That’s to the governor’s credit. But the way to grow New Jersey’s surplus is through the structural spending reforms that were introduced by legislators last week, not raising taxes in an economy that’s been growing for years and remains strong.”

Muoio cited an analysis released Monday by Moody’s investor services that listed New Jersey and Illinois as the only two states not prepared to weather a recession because of insufficient budget surplus.

With last week’s revenue projections, the state budget surplus is expected to be over $1 billion this year and projects to be more than $1 billion in the next fiscal year, based on Gov. Phil Murphy’s proposed spending plan. The Treasurer is also proposing to make a $317 million deposit into the state’s Rainy Day Fund, a budgetary “lock box” where funds cannot be spent except for economic emergencies.

Despite the good news, the administration is still seeking a millionaires tax. Specifically, it wants the 10.75% tax rate imposed last year on income over $5 million, to apply to all income over $1 million or more. Muoio did not mention the millionaires tax in her news release, she repeatedly named bigger budget surpluses as a reason to raise taxes in her budget testimony.

Moody’s, however, had issued another analysis back in March that suggests a millionaires tax may not be such a good idea. Moody’s noted that states like New Jersey that relied on taxes on high income earners experienced greater revenue volatility when a recession hit.

“A millionaires tax may raise revenue now in the short term and while the economy is strong, but as Moody’s warns, those revenues may not be there if the economy goes south,” Musick said.

“The Murphy administration and the Legislature already raised taxes $1.6 billion last year to pay for increased state spending, and here we are a year later facing yet another tax increase,” Musick said.  “A millionaires tax will just make New Jersey’s revenues that much more volatile and that much more vulnerable to an economic downturn, but will do nothing to solve the long-term financial problems this state faces.”

“We need to start now to reduce long-term pension and health benefit costs,” Musick said. “If we don’t, they will just continue to eat up more and more of the state budget, and no amount of tax increases will ever solve the problem.”