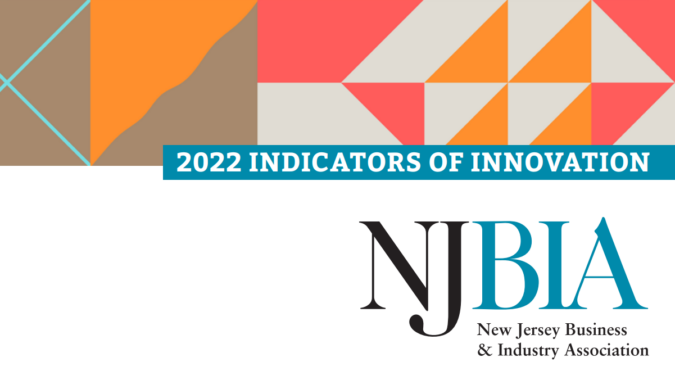 NJBIA’s updated 2022 Indicators of Innovation report, a comprehensive examination of how New Jersey’s innovation economy compares to other regional states, shows the Garden State slipping slightly in overall score and position from the 2020 report, but also taking key steps which could improve its future standing.

Released today, the study analyzes data for 12 indicators in three major areas that are key to a robust innovation ecosystem – capital, talent, and business – and makes a series of recommendations to improve New Jersey’s competitiveness in building a more robust innovation economy.

“While New Jersey’s standing in the region has decreased somewhat, some of the recommendations made in our 2020 Indicators of Innovation report have only been recently put into place,” said NJBIA Director of Economic Policy Kyle Sullender. “As a result, we hope to see some improvement in certain areas of the innovation economy going forward.

“At the same time, there are still several indicators where New Jersey very much remains an outlier regionally and nationally – notably in business tax climate and net migration of first-time, degree-seeking undergraduates. Those are areas where New Jersey continues to need great improvement.”

In the seven-state comparison, NJBIA scored each of the 12 indicators from 1 (least competitive) to 7 (most competitive), with a potential high score of 84 points.

Massachusetts (totaling 69 points) and New York (65) remain the regional leaders in innovation, as in the 2020 Indicator of Innovation report, followed by Pennsylvania (51) and Maryland (45).

New Jersey currently finds itself tied with Connecticut for fifth place with 41 points each. New Jersey’s standing in the 2020 report was fourth overall, with 44 points.

Delaware is currently ranked last out of the seven states with an innovation score of 26.

“As in past reports, we encourage multiple recommendations in the three areas which can help put New Jersey on a path of becoming an innovation leader within the region,” Sullender said. “Addressing continuing obstacles, especially regarding our tax climate, can help result in a stronger innovation ecosystem for the state.”

NJBIA’s full Indicators of Innovation report and graphics can be found here.

Key takeaways from the latest report include:

Capital Recommendations: Two of NJBIA’s previous recommendations from 2020 – increasing funding for the New Jersey Commission on Science, Innovation and Technology (CSIT) and forming public-private partnerships with state capital and venture capital funds – are in progress.

Outstanding recommendations to increase innovation capital in New Jersey include passing bill A-2487/S-2707, which increases credits awarded for R&D in strategic sectors to 15% of qualified expenses exceeding the base amount and at least 15% for basic research payments; continuing to maintain/increase CSIT funding; and monitor/analyze startup generation and job creation as a result of the new New Jersey Innovation Evergreen Fund.

Talent Recommendations: A 2020 recommendation to increase Public-Private-Partnerships (P3s) to pool financial resources and build relationships between industry professionals, academic researchers and government officials was launched earlier this year by NJBIA and the New Jersey Council of Community Colleges in the form of the NJ Pathways to Career Opportunities Program.

Another previous recommendation was to increase and annualize funding for the Innovation and Research Fellowship Program. However, Notice of Grant Opportunities decreased in FY21 and FY22.

NJBIA continues to recommend the allocation and administering of funds to New Jersey’s higher education research institutions to establish partnerships which would help entrepreneurs secure visas and allow them to build businesses and create jobs in the U.S.

Business Recommendations: In 2020, NJBIA recommended the establishment of the Government Efficiency Regulatory Review (GEARR) Commission to determine where rules and regulations are creating outsized burdens on New Jersey businesses.

In 2021, the bill was passed unanimously in the Senate and overwhelmingly in the Assembly (72-1-0). Gov. Phil Murphy, however, vetoed the bill. NJBIA maintains its recommendation to establish the GEARR Commission to help improve New Jersey’s business climate.

A 2020 recommendation by NJBIA to reinstate a corporate tax incentive program was completed with the establishment of the New Jersey Emerge program.

New York’s R&D investment still far exceeds the spending of the other six states combined. In 2020, the Empire State spent $453.8 million in R&D, according to the National Center for Science and Engineering Statistics.