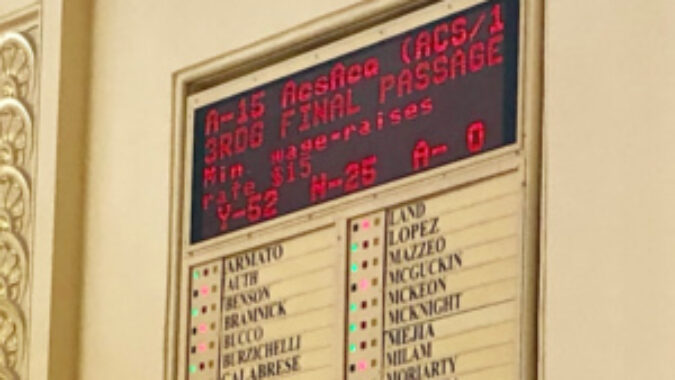 “New Jersey’s small business community wrote thousands of letters to our lawmakers and testified how they will struggle, stagnate or fail when this legislation is signed by the governor. With today’s passage, the urgent concerns of this community have not been heard.

“For years, NJBIA has said any increase in the minimum wage should be done responsibly. This legislation falls woefully short of that standard, and our small businesses will bear the brunt of it. In the first year alone, they will see a 35 percent increase to their expenditures, when including increased payroll taxes as a result of the wage increase.

“After the full phase-in, the minimum wage will have risen 70 percent from today’s level without the requirement of lifting a single skill.

“It is extremely disheartening that there is no economic analysis that could ultimately serve as an off-ramp from this policy in the event of an economic downturn or natural disaster, as California enlisted when it raised its minimum wage to $15 an hour. Passing this bill without that economic analysis is fiscally irresponsible.

“In New Jersey, there are nearly 600,000 employees who work for companies that employ 20 workers or less. These are the employers who are most vulnerable to a law which will ignore the reality of how they balance costs to revenues. These companies operate on the slimmest of margins, with business owners, themselves, challenged to make ends meet on any given day.

“New Jersey’s businesses continue to face increasing challenges to survive. Just in this last year alone, the state budget was balanced on their backs with increased taxes, new costly mandates with expensive compliance regulations and more subsidies for energy delivery, driving up their cost of doing business even more.

“Every day, our small business owners put themselves on a pathway to a life’s work, to provide jobs, give back to their communities and drive our economy. Rather than help them, our policymakers continue to throw roadblocks to that pathway.

“Let’s now get to work on clearing their path so they can sustain all that has been thrown at them. Tax credits for job creation and workforce development and legislation to address structural reforms should be the next priorities of our lawmakers, not more taxes and mandates.”