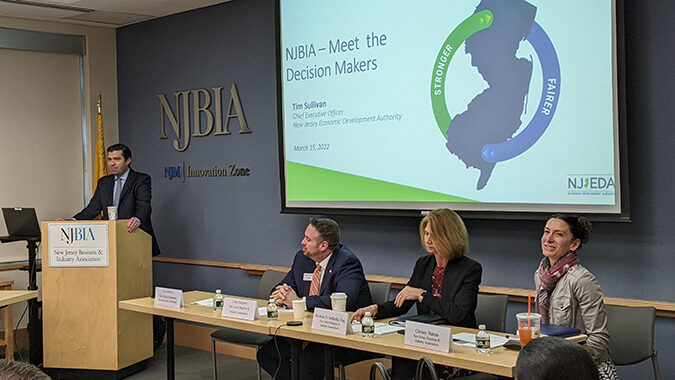 Over the past two years, the New Jersey Economic Development Authority (NJEDA) awarded 94,000 grants, loans and other means of support to businesses in the state while providing $710 million in direct support to companies. According to Tim Sullivan, the Authority’s CEO, “There is a lot going on!”

“Particularly compared to where we were (at the beginning of the pandemic) and worried about where we were going to be, I can tell you that our momentum is quite strong,” Sullivan said today at NJBIA’s Meet the Decision Makers event in Trenton.

New Jersey now ranks 9th in the U.S. based on venture capital dollars invested per state, and 4th nationally in Gross Domestic Product growth in Q3 2021.

“In addition to our spot within the Top 10 for venture capital dollars, we are also seeing companies of all sizes choosing to benefit from all that New Jersey has to offer,” Sullivan said. “This, in turn, will lead to the creation of thousands of jobs and bring in even more investment dollars in the coming years.”

Sullivan added that another reason for optimism surrounding the state’s economic outlook comes from the rapid growth of exciting new industries blossoming in the Garden State.

“We are in the early days of a bunch of new industries that are really transforming how we think about New Jersey’s economic makeup. Of course we have financial services, life sciences and technology, but new industries like offshore wind, cannabis, sports betting, esports, and film and television are experiencing rapid growth and creating jobs up and down the state,” Sullivan said.

The Main Street Recovery Program’s Small Business Lease Grant, which launched in October 2021, has approved 159 applications and disbursed more than $3.69 million to date. Its other products include the Small Business Improvement Grant, and the Micro Business Loan Program and Main Street Lenders Grant, launching in April and May, respectively.

While main street small businesses are often looked at as the backbone of the economy, manufacturing has deep historical roots within the state, and Sullivan says the industry’s importance is not lost on the NJEDA.

“Some of the innovation economy is doing double duty as manufacturing as well,” Sullivan said.

He cited the recent commitment of the NJEDA and Princeton-based venture capital firm SOSV to bring SOSV’s acclaimed HAX hard tech startup development program to Newark as a vein for direct manufacturing support.

“HAX is under contract to spin out 100 companies, a lot of which will be companies that are going to be manufacturing things. This is not just a software play. Part of selling to HAX why they should come here was part of New Jersey’s rich tapestry of manufacturing capabilities,” Sullivan said.

Other areas of support for manufacturing include the aforementioned Emerge Program, which is targeting advanced manufacturing, as well as a partnership with the Gloucester County Institute of Technology, in which the NJEDA will provide up to $75,000 for programs that prepare students and workers for jobs in heavy steel offshore wind component manufacturing.

“I think that workforce training and economic development are two sides of the same coin,” Sullivan said.