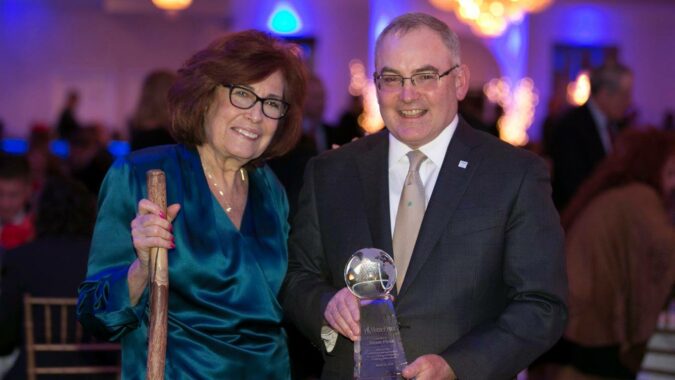 NJM Insurance Group President and CEO Bernie Flynn was presented HomeFront’s annual “Building a Better World” award last week at the Stone Terrace in Hamilton to honor his longtime support for the Lawrenceville-based nonprofit and other contributions he has made to the greater Trenton community. 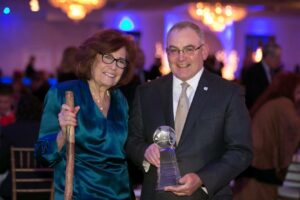 “NJM under Bernie’s leadership has re-defined the role of a big corporation in the community,” said HomeFront Founder & CEO Connie Mercer. “NJM has become a very visible example of the class model of a corporation that is committed to both healthy profits and community health.

“No one has been more astute than Bernie at identifying the holes in the safety nets for families in New Jersey as government has pulled back. He is the maestro that organized a symphony of corporate support from around the state to help fill the gaps in just the right places.”

Established in 1992, HomeFront has a mission to help families break the cycle of poverty by providing comprehensive programs and services such as case management, homelessness prevention, job placement and readiness as well as special programming for children. Each day, HomeFront provides social service outreach to nearly 500 people in need of housing, the majority of them children.

Flynn has served as NJM’s president & CEO since April 2008. In addition to the volunteer and funding efforts he has made to HomeFront with his family and with NJM, Flynn also currently serves as co-chair of Greater Trenton, a nonprofit whose mission is to advance economic development and revitalization projects in New Jersey’s capital city.

Flynn will retire from NJM on April 27 after a career at the company that spanned 25 years, including the past 10 as its leader. Mitch Livingston, NJM’s chief operating officer and general counsel, will succeed Flynn as only the ninth president in NJM’s 104-year history.