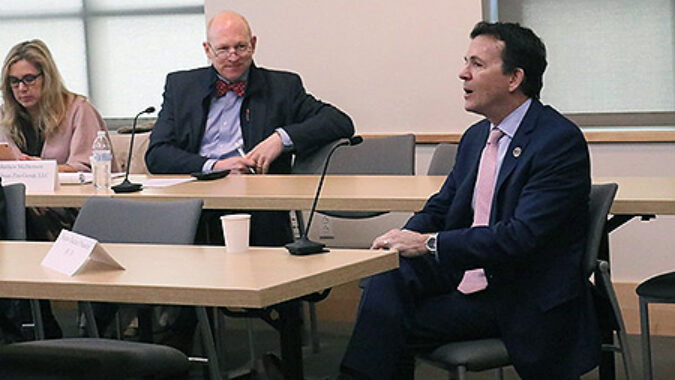 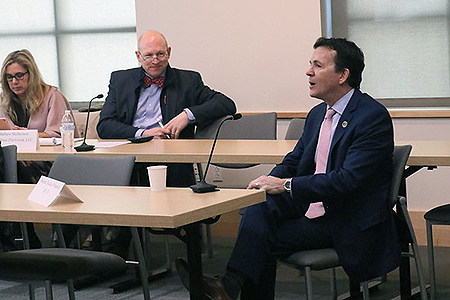 As a Republican on the Senate Budget and Appropriations Committee in a state government run by Democrats, Declan O’Scanlon is expected to play the role of fiscal conservative. But in New Jersey, it’s not just the spending lawmakers approve every year, it’s also the spending that is baked into numerous statutes enacted over decades.

So for O’Scanlon, government spending is a binary issue: One either supports changing the structure of state and local governments so they’re not so expensive to run, or one supports massive tax increases to continue paying for the current system.

After O’Scanlon shared his views during a meeting of the NJBIA/State Chamber Joint Taxation and Economic Development Policy Committee on Tuesday, it’s clear he is in the change-government camp.

“We’ve been trying to push the Governor to understand if you look out five years, we’ve got an almost insurmountable hole,” O’Scanlon said. “There are some people who have written off whether New Jersey has crossed the line of no return and in a hole it’s almost impossible for us to dig ourselves out of.”

For solutions that do not involve massive tax increases, O’Scanlon has turned to another Democrat in a leadership position, Senate President Stephen Sweeney and his Path to Progress reform plan. Sweeney put together a group of government and economic experts to look at the structural changes needed that would rein in the spending that is dictated by statutes.

The report has led to introduction of 27 separate reform bills, most of which NJBIA supports and advocates for. But for O’Scanlon, the ones that matter most are those that deal with public employee pensions and health benefits.

Sweeney has said in separate appearances at NJBIA events that Path to Progress reforms would save state taxpayers $3 billion in public employee pension and healthcare costs and $2 billion in county and municipal property taxes.

The centerpieces would establish a hybrid government pension system and make a switch to more affordable gold-level health benefit plans for public employees to save both workers and taxpayers money. Changing from platinum health benefit plans to gold-level plans, for example, would save a teacher about $4,000 a year and save taxpayers $11,000 per teacher, Sweeney has said.

O’Scanlon says New Jersey’s structural budget deficit is somewhere between $3.5 billion and $5 billion. The fact that the economy has been growing for a historic length of time means an economic recession will make that deficit even worse. Adding to the problem is the fact that state pensions have been underfunded for decades. Gov. Phil Murphy and his predecessor, Chris Christie, have spent billions of dollars in recent years to try to make up for it.

He pointed out that massive tax increases would have to go well beyond the millionaires tax that Governor Murphy proposed in his State of the State address last week and has championed throughout his first term. The millionaires tax would generate in the range of about a half billion dollars. O’Scanlon said to raise the billions of dollars the state needs to close the structural deficit would require something like a devastating 20% tax increase on everyone or a crushing 40% tax increase focused on businesses and the highest earners.

“This is the depth of the hole we are in,” O’Scanlon said. “We’re going to get to a point where if you’re not going to accept these reforms and save these multiple billions of dollars, then you’re looking at massive tax increases.”