NJ’s GDP Growth: Cause for Concern? 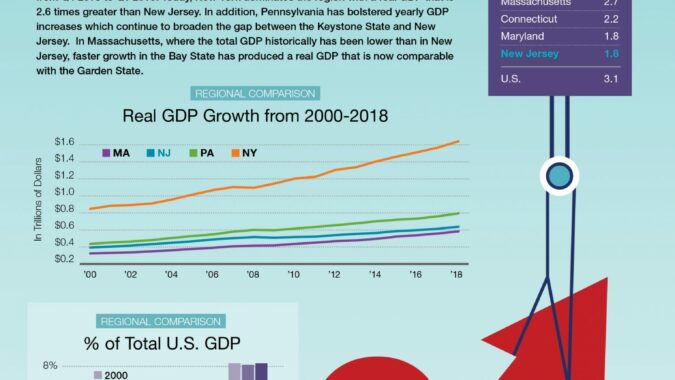 The latest data from the U.S. Bureau of Economic Analysis shows New Jersey’s percentage change in real GDP grew 1.8% during the first quarter of 2019, trailing both the region and the national average, NJBIA reported in a new infographic released Wednesday. 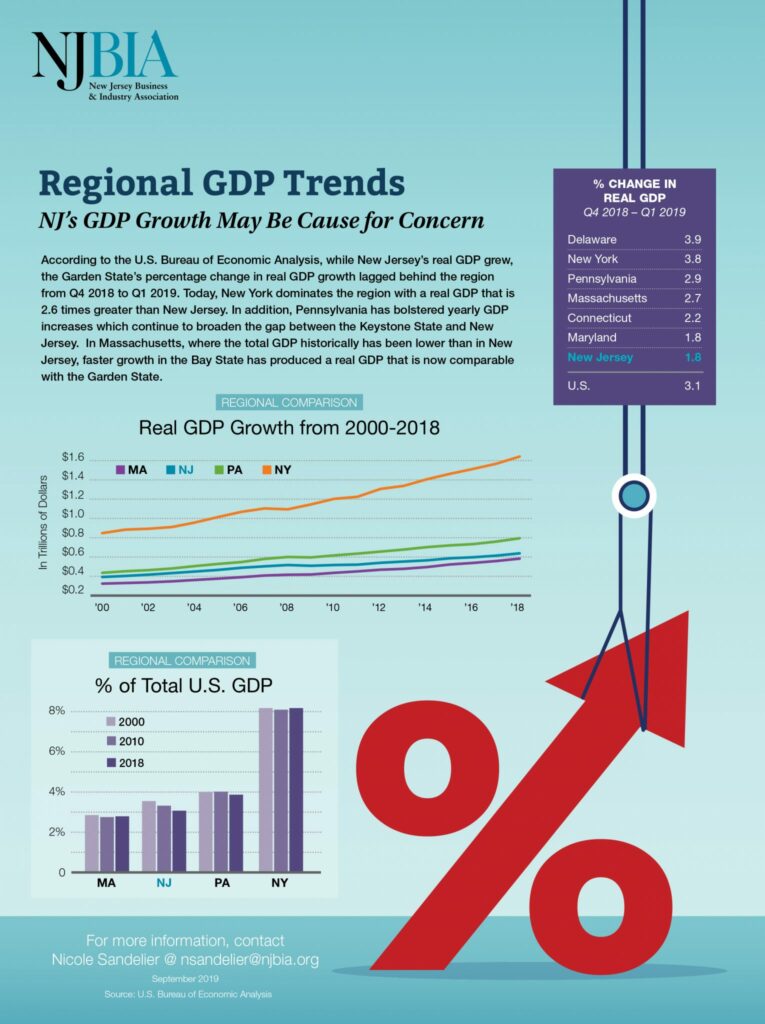 Real GDP, an inflation-adjusted measure that reflects the value of all goods and services produced by an economy, grew 2.9% in Pennsylvania and 3.8% in New York during that same time period. Nationally, the real GDP grew 3.1% during the first quarter of 2019.

“While one quarter of weak economic growth by itself isn’t typically a cause for alarm, New Jersey’s GDP continues to grow at a slower rate in comparison to the region and the nation,” said NJBIA Director of Economic Policy Research Nicole Sandelier. “Overall, in fact, New Jersey’s total percentage share of the national GDP has declined from 2002 to 2018. It is this slow growth over a time of national economic expansion that may be cause for concern.

“When you consider that New Jersey’s regional business climate lags behind our neighbors, and that state expenses and debt are outpacing revenues, it raises uncertainty about the state’s ability to withstand a downturn that may come in the years ahead.”

In Massachusetts, where the total GDP historically has been lower than in New Jersey, faster growth in the Bay State has produced a real GDP that is now comparable with the Garden State. Total Massachusetts GDP was $567.3 billion in 2018, almost double its GDP of $289.92 billion in 2000. In the first quarter of 2019, Massachusetts had a 2.7% percent increase in GDP, compared to New Jersey’s 1.8%.

“NJBIA continues to be committed to bolstering New Jersey’s innovation economy as a way to enhance the state’s GDP growth,” added NJBIA Chief of Government Affairs Officer Chrissy Buteas. “New Jersey is trying to position itself as an ideal location to retain and attract businesses that spur invention and innovation.”

“The increased Angel Investor Tax credit, which was recently signed into law and supported by NJBIA, is a prime example of the initiatives being championed to boost the innovation economy.  In addition, NJBIA believes that a key component to enhancing the state’s innovation ecosystem is the ability to attract companies and individuals that lure venture capital investment.  As such, NJBIA is committed to increasing venture capital investment throughout the state.”