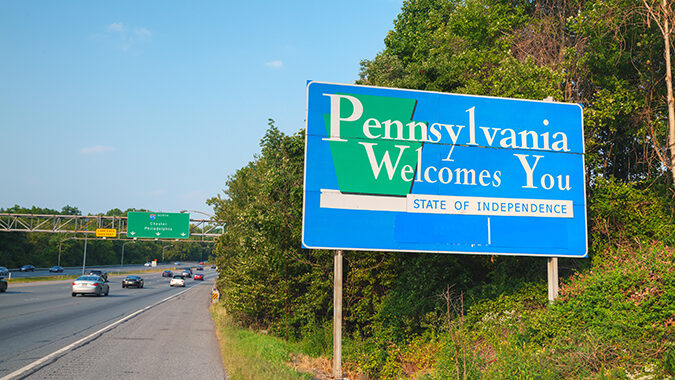 Fresh concerns about New Jersey’s regional business competitiveness are front and center this week now that Pennsylvania lawmakers have lowered the Keystone State’s corporate tax rate by 1% effective Jan. 1 – the first step on a path that will gradually reduce Pennsylvania’s tax rate to 4.99% by 2031.

Before HB 1342 was enacted on July 8, Pennsylvania’s 9.99% Corporate Net Income Tax (CNIT) rate was the second highest in the nation, exceeded only by New Jersey’s top Corporation Business Tax (CBT) rate of 11.5%. The move lowering Pennsylvania’s rate to 8.99% next year further widens the corporate business tax rate disparity between the two neighboring states, and that gap will grow wider each year.

NJBIA Vice President of Government Affairs Christopher Emigholz said Thursday the situation means New Jersey will be at an even greater disadvantage in attracting and retaining businesses on this side of the Delaware River. It also underscores the need to ensure the 2.5 percentage point surcharge added several years ago to New Jersey’s top 9% CBT rate is allowed to sunset as scheduled on Jan. 1, 2024.

“Pennsylvania is undoubtedly one of NJ’s biggest competitors for business and jobs, and they just took bipartisan action to lower their corporate taxes, making our highest-in-the-nation CBT rate even more of an outlier,” Emigholz said.

“No other state in the nation, besides New Jersey, has a double-digit corporate tax rate, but Pennsylvania used to be close at 9.99%,” Emigholz said. “Now that Pennsylvania’s 9.99% rate is dropping next year, the question is how does New Jersey respond? Hopefully, it will be by allowing New Jersey’s CBT surtax to sunset at the end of next year as it is currently supposed to per state law.”

According to NJBIA’s 2022 Regional Business Climate Analysis, New Jersey’s business climate continues to trail the rest of the region. The Garden State has the highest corporate business tax rate, state sales tax rate and property tax paid as a percentage of personal income, as well as the second highest top income tax rate, in the region.

Massachusetts currently has the top minimum wage rate of $14 per hour. However, Connecticut’s current $13 per hour rate will increase to $14 in July, while New Jersey’s minimum wage is also slated to increase from $13 to $14 per hour on Jan. 1, 2023.

“Pennsylvania, arguably New Jersey’s nearest neighbor and competitor, was already ahead of the Garden State in terms of its business climate, and their new corporate rate reduction only exacerbates the competitiveness gap between the two states.”