Percentage of Women Appointed to Fortune 500 Boards Jumped in 2017 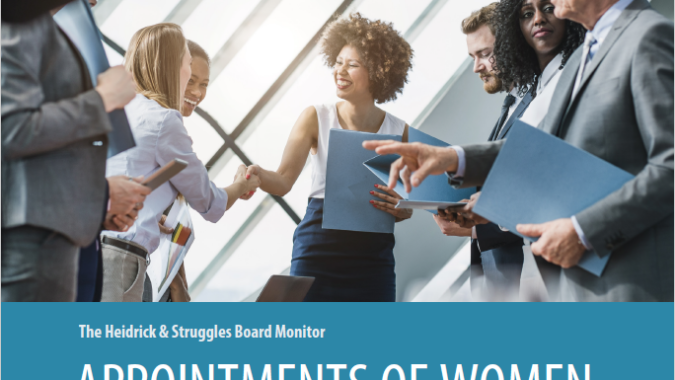 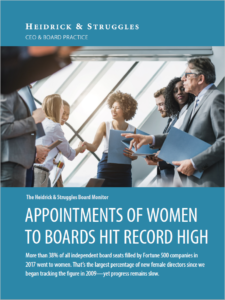 After dropping in 2016, the number of women appointed to Fortune 500 boards shot up last year, according to the global executive search firm Heidrick & Struggles International Incorporated.

The firm’s Board Monitor 2018 report says Fortune 500 companies filled 358 vacant or newly created seats in 2017, with 137 of them (38 percent) going to women. It’s the highest proportion of women appointed to boards in the report’s nine-year history.

“Few leadership positions are more consequential: Fortune 500 boards oversee companies that together account for two-thirds of the U.S. GDP, with $12.8 trillion in revenues, $1 trillion in profits, $21.6 trillion in market value, and 28.2 million employees worldwide,” the report states.

“Because the percentage of women overall on boards increased only slightly, it appears that most of these new female appointees were replacing women who had left their boards,” the report said.

Gender equality issues have been growing in importance for years now. In response, NJBIA started the Women Business Leaders Network to provide women with the skills and resources necessary to break into the C-suite. The goal is to reach parity between men and women on corporate boards and in top executive positions.

“The goal is to build the next generation of women CEOs and a more diverse leadership pipeline to the board table,” NJBIA President and CEO Michele Siekerka said at the time.