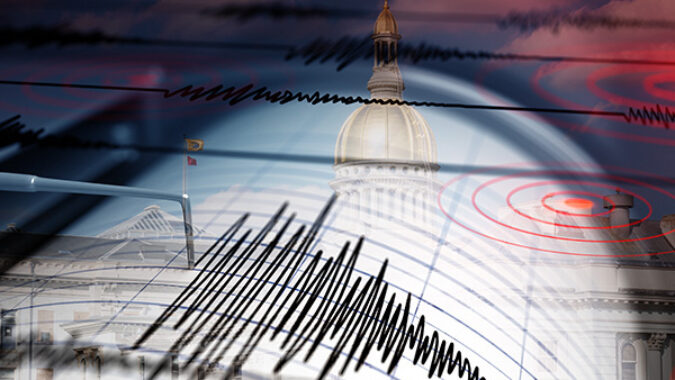 Gov. Phil Murphy’s narrow margin of victory in an election he was expected to win handily on Tuesday came as a surprise to many, but the bigger shock is the defeat of Senate President Steve Sweeney and what this means for the Democratic agenda going forward.

The AP has called the election for Murphy, who as of Friday held a 56,000-vote lead over Republican Jack Ciattarelli out of nearly 2.5 million votes cast. Ciattarelli, who tapped into voter frustration over taxes and other “kitchen table” issues, has not conceded, saying he wants every vote counted.

Monday is the deadline for all ballots to be counted, and the results of provisional and emergency ballots must be reported by each county board of elections by Nov. 19.

Sweeney, who is the second-most powerful Democrat in the state and New Jersey’s longest serving senate president, has lost his 3rd District seat to political newcomer Republican Edward Durr by 2,100 votes.

Sweeney has not yet conceded, but his apparent defeat has set off a scramble among Democratic senators jockeying to be the next leader. On Friday evening, Sen. Nicholas Scutari (D-22) appeared to have the votes to become the next senate president.

Others that had been under consideration included Sens. Joe Cryan (D-20), M. Teresa Ruiz (D-29), and Paul Sarlo (D-36). The full Senate Democratic Caucus must now meet to formally elect the next senate president.

Although Democrats will still control the Governor’s office, and the Assembly and Senate, they have sustained a net loss of one Senate seat and possibly up to six Assembly seats. What remains to be seen is the direction the progressive Democratic agenda takes after this wakeup call at the polls.

Assembly Speaker Craig Coughlin and Assembly Majority Leader Lou Greenwald said at a post-election news conference that the voters have delivered a loud and clear message. Going forward, there would be a greater focus in the Assembly on property taxes and issues that make a “meaningful difference in people’s lives,” Greenwald said.

However, this was not likely to be rushed through in the lame duck period before the new Legislature is sworn in on Jan. 11, Greenwald said.

NJBIA President & CEO Michele Siekerka said another message that was delivered at the polls on Election Day was that the business community’s concerns also need to be heard in Trenton. One reason for the tight governor’s race is the discontent among New Jersey businesses about their recovery from the pandemic, the economy, and higher taxes, she said.

“We hope that’s one of the wake-up calls. That we realize that we’re not just here to take from, (but) we’re here to be listened to,” Siekerka told NJ Spotlight News.

In providing his take on the election results on Friday, Murphy said he was proud of his progressive agenda’s accomplishments, saying it had allowed him to withstand a “red wave” that swept the country. “But we clearly need to touch more people, we need to get at more kitchen tables,” he added.

Assembly Democrats have decided to mostly continue with their current leadership in 2022. Coughlin will continue serving as Speaker, Greenwald will continue as majority leader and Annette Quijano (D-20) will serve as conference leader. The only change is Benjie Wimberly (D-35), who was elevated to speaker pro tempore, replacing Assemblyman Gordon Johnson (D-37), who was elected to the Senate.

On the Assembly Republican side, John DiMaio (R-23) will be the new Assembly minority leader, replacing Jon Bramnick (R-21) who was elected to the Senate on Tuesday. Assemblyman Ned Thomson (R-30) will replace Assemblywoman Nancy Munoz (R-21) as minority conference leader, and Assemblyman Antwan McClellan (R-1) will become minority whip.

On the Senate Republican side, Sen. Steve Oroho (R-24) will replace Sen. Tom Kean as Senate minority leader. Sen. Kean did not seek re-election and is set to run for the 7th Congressional District House seat.