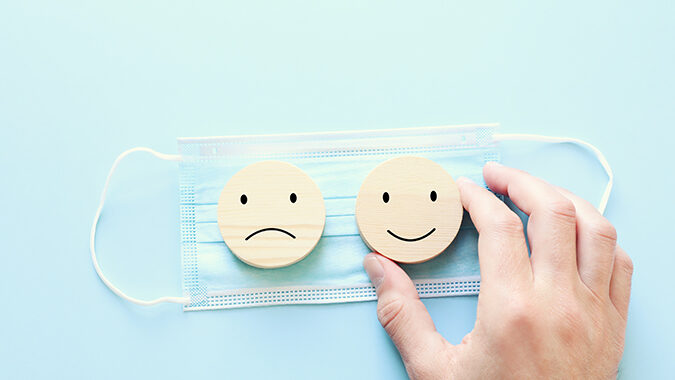 A Stockton University Poll released Tuesday found that most New Jersey adults maintained or improved their financial status as COVID-19 surged and waned in recent months. However, as inflation rises, a majority are pessimistic about economic conditions.

Daily COVID-19 cases, hospitalizations and death numbers started rising in December and the surge peaked in January with 35,000 new cases and 6,000 hospitalizations daily. Lower numbers earlier in the pandemic had spurred massive job losses and economic decline. However, during the most recent surge, most of those surveyed remained employed, did not experience lower incomes, or did not curtail their spending, according to the statewide poll of 655 adults.

Even so, a majority feel negatively about the New Jersey economy as they see inflation spiral, store shelves go empty and businesses run short on staffing, according to the poll sponsored by the William J. Hughes Center for Public Policy at Stockton University.

“These results reflect the delicate balance our political leaders must employ in addressing the economy,” said John Froonjian, director of the Hughes Center. “On the one hand, jobs are plentiful, and wages are going up. But people aren’t comfortable as inflation spikes gas and food prices.

“Overall, the perception is that the economy isn’t doing that well,” Froonjian said.

On an individual level, most of those polled have at least held ground financially over the past six months. Household income stayed level for 57% and increased for 23%.

A slim majority of 51% said their overall fiscal status stayed the same, and it got better for 16%. A majority kept spending at the same level (51%) or more (14%) than they did before the pandemic surged. Nearly half said they did fine despite rising inflation. Close to 60% said they were employed, 20% were retired, and 10% were unemployed and looking for work at some point in the past six months.

A significant minority have been hurt financially. A third (32%) said they are in worse financial straits. One in five (19%) saw household income go down, and 33% cut back on spending the past six months. A majority of 51% said rising food, housing and fuel costs are making it more difficult to make ends meet.

“Most people, but not everyone, did OK during the pandemic’s latest assault on public health. But many don’t feel comfortable about the way things are going,” Froonjian said.

Of those who were looking for work at some point in the past six months, most said at least some jobs are available where they live but they are not satisfied with the quality of the jobs offered.

Only 23% gave positive marks to the state economy. Forty-one percent rated it as average, and 34% said it is in bad shape. Exactly half said the state is headed in the wrong direction, with 34% thinking it’s on the right track and 8% neutral.

Alyssa Maurice, polling researcher for the Hughes Center, said the poll reflected a number of trends or developments that could signal problems with the economy. Among the minority looking to buy, 67% said it’s hard to buy a car, 77% said it’s difficult to afford a new house and 75% said they have seen local businesses close. Only 24% have not regularly experienced empty shelves at local stores and 64% have experienced at least some shipping delays when ordering products.

The poll also found that 60% or respondents said their places of employment have been short-staffed, and 34% have had to adjust operating hours because of it.

The poll was conducted Feb. 16 through Feb. 26, just prior to the conflict in Ukraine. Full poll results are on the Hughes Center Polling Institute website.