Poll: NJ Workplaces More Diverse than Most in US but Challenges Remain 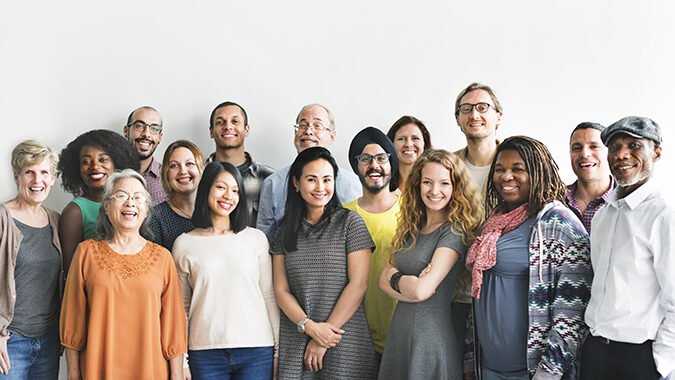 Though working New Jerseyans as a whole feel positively about diversity, equity and inclusion in their workplaces, significant divisions remain along racial, gender and political lines. These findings are part of the State of Diversity poll, a public opinion survey released by Taft Communications, the Rutgers-Eagleton Poll, and New Jersey Business & Industry Association.

For the first time the annual Taft State of Diversity survey includes nationwide data. And, while working people in New Jersey interact with someone of a different race or ethnicity more at work than outside of work, they do so in both situations at higher rates than the nation as a whole. In New Jersey, 80% of employed individuals say interaction at work is a daily practice for them, compared to 68% nationwide. And 58% of employed people in New Jersey say such interactions outside of work are a daily practice, compared to 50% in the national survey.

In New Jersey, Black respondents (67%) are more likely than either white respondents (53%) or Hispanic respondents (57%) to say they have these types of interactions outside the workplace daily.

“After five years of observing these trends in our home state of New Jersey, we were excited to expand our State of Diversity survey nationally to see how workers across the country view these critical issues,” said Taft CEO Ted Deutsch. “While there are many encouraging macro findings related to DEI in the workplace, the divide in perceptions by race, gender, politics, and sexual orientation are a distressing confirmation of the increased polarization we see in so many aspects of American society. In some areas, New Jersey is ahead of the nation, but we still have a lot of work to do.”

“It is encouraging to see New Jersey taking a lead over other states in interactions between races and ethnicity in the workplace – especially as we are one of the most diverse states in the nation. Hopefully, this trend continues in the positive,” said NJBIA President and CEO Michele Siekerka. “However, the report suggests there are still more gains to be made when it comes to treatment at work and whether workers feel they have been the subject of discrimination. Further, as the report notes, employers need to play a role in promoting racial equality. Over recent years, through regular NJBIA DEI Council gatherings and communications with employers, we see more and more employers taking a lead in the DEI space working toward making meaningful change in their workplaces.”

“It is more important today than ever to measure and quantify workers’ views on diversity in the workplace and begin to assess whether real progress is being made or we are just saying the right things. In this survey, we see markedly different personal experiences and perceptions of the workplace, remote work, and the pandemic’s impact, as well as opinions on what employers should do to support workplace diversity,” said Ashley Koning, assistant research professor and director of theEagleton Center for Public Interest Polling (ECPIP) at Rutgers University–New Brunswick.

Full New Jersey 2021/22 poll results are available here. You can also view the results of all prior Taft New Jersey State of Diversity surveys here.

New Jerseyans and those polled nationwide had similar responses on whether all employees at their work are treated the same regardless of race or ethnicity, gender, or sexual preference:

With regard to experiencing discrimination in the workplace, fewer than half — 44% — of New Jersey respondents say they have personally been discriminated against “often” or “occasionally” based on their race, gender, religion, sexual preference. But, again, responses varied according to several categories.

Though 61% of New Jersey workers say their employer should play a role in promoting racial equality– such as making public statements about diversity or donations to related causes, or committing to a more diverse workplace, Blacks (72%) were significantly more likely than whites 56%) and Hispanics 64%) to feel that way. Among women 64% agreed compared to 56% of men. Democrats (81%) were far more likely than Republican (41%) to think so

More than half of New Jerseyans (56%) feel the pandemic has had no impact on racial equity in the workplace, 25% feel it has had a negative impact and 9% say a positive impact.

The results are from a joint statewide survey commissioned by Taft and NJBIA and conducted by the Eagleton Center for Public Interest Polling (ECPIP), home of the Rutgers-Eagleton Poll, at Rutgers University. Since 2016, Taft has polled New Jerseyans to gain insights into the day-to-day reality of and public attitudes toward diversity in the state. This year’s poll was conducted by telephone using live interviewers November 17 to December 10, 2021, with a scientifically selected random sample of 1,313 New Jersey adults, 18 or older. Comparisons to national attitudes are made with a nationwide Taft and Rutgers-Eagleton survey taken in January 2022. Those polled identified themselves as currently employed full or part time, in the military, and/or actively seeking employment but were employed in the six months prior to or at any time during the pandemic.

Taft is a communications consultancy with nearly 40 years of experience. Through strategic communications and leadership development, Taft guides clients to meaningful expressions of purpose to drive positive impact — for all stakeholders, including customers, employees, shareholders, communities, and the earth and environment. Taft ClearPoint, the firm’s practice in leadership communications, is the go-to source for leaders and aspiring leaders to acquire the skills needed to master today’s “constant conversation.

The New Jersey Business & Industry Association is the nation’s largest statewide employer organization whose members collectively provide nearly 1 million jobs. As the voice of business, NJBIA provides practical information, money-saving services and powerful advocacy in Trenton for its member companies in order to build a more prosperous New Jersey. Learn more about NJBIA at njbia.org and follow @njbia on Twitter or Facebook.com/NJBIA.

ABOUT THE EAGLETON CENTER FOR PUBLIC INTEREST POLLING (ECPIP)
Home of the Rutgers-Eagleton Poll, ECPIP was established in 1971 and is the oldest and one of the most respected university-based statewide polling operations in the United States. Loaded at the Eagleton Institute of Politics at Rutgers University, ECPIP is now celebrating its 50th year and the publication of over 200 polls. ECPIP’s mission is to provide scientifically sound, non-partisan information about public opinion. To read more about ECPIP, please visit: eagletonpoll.rutgers.edu. Follow ECPIP on  Facebook and Twitter.