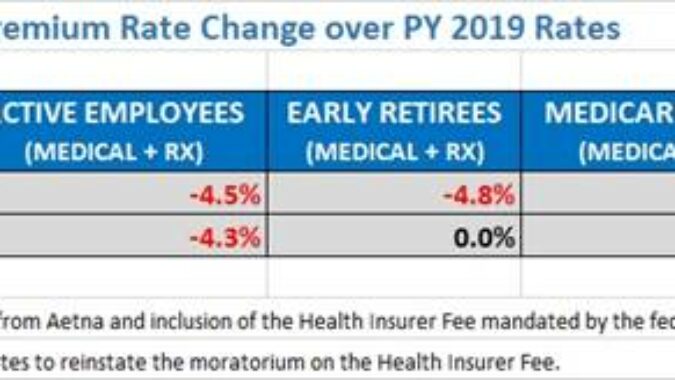 (TRENTON) –  The cost of providing healthcare benefits for participating local public employers across New Jersey will decrease as a whole for 2020, according to an announcement this morning by State Treasurer Elizabeth Maher Muoio. The department says local government and school employers can expect to see relief in the coming year when it comes to the cost of health benefits and pension contributions.

“Two of the largest drivers of property taxes are healthcare and pension costs and today those costs are being reined in,” said Governor Phil Murphy. “The fiscally responsible path we’re putting New Jersey on – a dogged pursuit to lower the cost of health care, collaboration with our public union partners, and bolstering our pension system – is the right one.”

Since taking office last year, the Murphy Administration has prioritized the pursuit of health benefit savings and efficiencies, with the Treasurer’s Office spearheading initiatives that are anticipated to save the state hundreds of millions of dollars in the current fiscal year. Many of those initiatives are now reaping dividends for local governments in the form of decreasing premium rates.

“This is certainly good news for property taxpayers who have become accustomed to shouldering cost increases year after year,” said  Muoio. “It’s also welcome news for local governments, which struggle to meet their obligations while remaining within the two percent property tax cap. It shows that our concerted effort to find efficiencies and savings in the delivery of quality health benefits is paying off.”

Muoio noted that local employers have become accustomed to budgeting for increases in pension and health benefit costs that can range as high as 10 percent at times. However, in the coming year, participating local employers will actually see a decline in those costs due to numerous cost-saving measures undertaken by Treasury’s Division of Pension and Benefits, including increased oversight of health benefit and prescription drug vendors, optimization of prescription drug rebates, better disease management, and a decrease in the use of out-of-network labs, a shift that was made possible due to collaboration with public employee representatives on the health benefits plan design committees.

As a result, participating local governments and school boards can expect to see premiums decrease as a whole. The biggest savings will be realized by local governments and school districts in the area of medical and prescription costs for active employees, which is the largest public employee sector. Early retirees and Medicare retirees represent far smaller public employee segments.

By comparison, the year before the Murphy Administration took office, rates for active school employees had increased by 13 percent. Based on national data from the U.S. Bureau of Labor Statistics, health insurance rates have continued to rise, hitting a five-year peak this spring as prices spiked 10.7 percent over the previous 12 months.

In contrast, 2020 premiums for participating employers are expected to change as follows based on the rates approved today:

Additionally, the newly calculated pension contributions for local employers will remain virtually flat, or even decrease in some cases, for Fiscal Year 2020 (FY 2020). On average, local employers can expect to see costs remain virtually flat for the first time in years, with an average increase across the pension systems of roughly 0.5 percent. Pension bills for PERS (Public Employees Retirement System) will actually decrease by 2.2 percent.

The stabilization in billing amounts is attributable to numerous factors, including local employers making the full actuarially determined contributions for many years, positive investment returns in FY 2018, and prior reforms that have lowered the benefit accrual rate for new hires.

The bills for local government employers are expected to be posted online Friday at: https://www.state.nj.us/treasury/pensions/pension-employers.shtml.