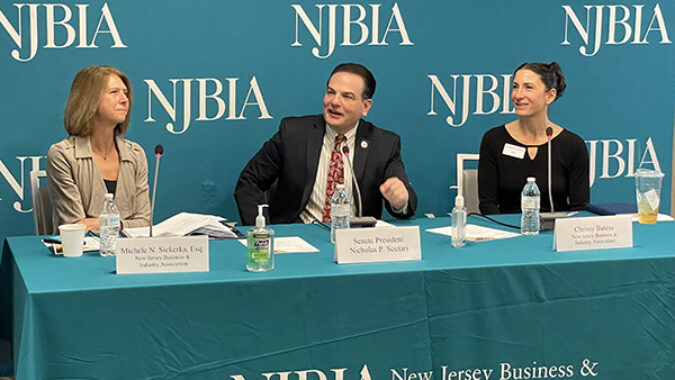 New Jersey’s new Senate President, Nicholas Scutari, met with business leaders Tuesday at NJBIA’s Meet the Decision Makers event in Clark, where he reaffirmed his commitment to tackling one of the state’s most pressing issues: affordability.

“Emphasizing our priority of affordability is first and foremost on my agenda this year,” said Scutari, who took over as senate president on Jan. 11. “We want to get back to basics. We want to make sure that affordability is front and center in all the things that we do in New Jersey.”

One of the initial bills passed during Scutari’s first legislative session as senate president was S-330, which increases the amount of funding distributed to municipalities from the Energy Tax Receipts Property Tax Relief Fund beginning in 2023. The bill targets affordability for homeowners by requiring that municipalities use the new funds to reduce their property tax levy.

“One of the things that we can do better in the future is doing less,” Scutari said. “Doing less sometimes is more. [We want to] work on the bills that are important to New Jerseyans and make sure that there is a full vetting process to things.”

Scutari said he wants to “slow things down” during legislative sessions in order to ensure items get more intensely reviewed.

“Legislators and the public need more of an opportunity to understand what it is that we are doing,” he added.

Additionally, Scutari said that working with stakeholders and keeping a balanced approach in mind is vital.

“We need to take a balanced approach to many different issues as it relates to business, industry and even insurance reforms,” Scutari said.

For example, when it comes to clean energy and the state’s Energy Master Plan, Scutari said that while he is a firm believer in moving toward electrification, he is not sure that is the only way to the state’s clean energy future.

“I am a believer that we will need to move in that direction, but that doesn’t mean that there aren’t other opportunities to utilize our existing infrastructure,” he said. “It is important to keep that balanced approach where you don’t just do one thing.”

Scutari said that this type of balanced approach is key to ensuring a healthy business environment in the state.

“We need to make sure business and industry not only survives in New Jersey, but also thrives. One thing we learned is that having jobs is pretty much the most important thing for the electorate,” he added.

Scutari, a Democrat who was first elected to represent the 22nd Legislative District in the Senate in 2004, and has served as majority whip since 2020 and as deputy majority leader in the 2018-2019 legislative session. He chaired the Senate Judiciary Committee for 12 years, and also served as a member of the Senate Commerce Committee.