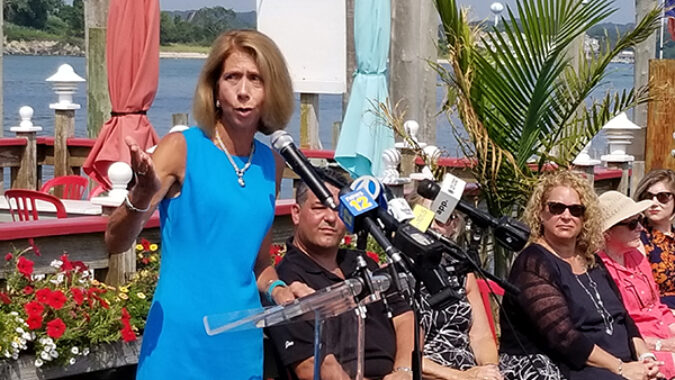 The ongoing hiring crisis and staff shortages that have forced many New Jersey businesses to curtail operating hours during the height of the summer tourism season are about to get worse now that student workers are preparing to go back to college campuses in mid-August.

“Teen workers will soon be returning to college and high school sports camps, leaving a further gap as we enter the peak summer tourism season,” NJBIA President & CEO Michele Siekerka said Tuesday during a news conference in Point Pleasant Beach with area business owners. All the businesspeople said they had curtailed operating hours this summer because of staff shortages and feared what will happen if they cannot replace the student workers who are about to leave.

“August is our busiest month, and we are dreading it because we are losing staff daily,” said Denise Beckson, vice president of Human Resources at Morey’s Piers, an 18-acre amusement and waterpark that spans six beach blocks in Wildwood. “There will probably be another 25% reduction in our workforce before Labor Day, coupled with the 30% reduction we are already operating under.”

Beckson said Morey’s Piers in its 50-year history has never struggled so much to find workers as it has this year. Operating hours have had to be reduced and some rides cannot remain open at times because of the lack of staff, even though Morey’s has raised wages significantly and offered other incentives.

Siekerka and the businesspeople who spoke at the event at Red’s Lobster Pot restaurant, which was closed Tuesday due to staffing issues, said the state’s COVID-19 relief efforts to help small businesses survive the pandemic are appreciated, including the $135 million in small business loans signed by Gov. Phil Murphy last week. However, more must be done to entice people to return to work now, they said.

“We need employment laws to be enforced,” said Alli O’Neill, manager at the Colonial Bakery in Lavallette. “I’m here to ask the Governor to please get people back to work. We need them to sustain New Jersey’s economy, especially in the summertime.”

The fact that New Jersey has one of the highest unemployment rates (7.3%) in the nation at the same time employers can’t find people to work points to another major factor involved in the hiring crisis – the long waiting lists at childcare centers. Parents need childcare in order to go back to work.

Karyn Serrano Jarzyk, owner of Kiddie Academy in Runnemede, said state COVID-19 licensing restrictions now require childcare businesses to operate with more staff, which is difficult to find, and that means there are fewer openings at childcare centers for the children of parents who want to return to work.

Another contributing factor to the hiring crisis has been the federal program that provides people with $300 a week in extra pandemic unemployment benefits on top of their regular unemployment benefits, they said. That supplemental federal program stops on Sept. 4, but the end comes too late for New Jersey businesses that need workers right now during the peak of the summer tourism season.

“Our employees did not return, though our customers have returned in record numbers in 2021,” said Vicki Clark, president of the New Jersey Tourism Association. “Our businesses have been forced to cut hours, close portions of their operations and even shut down unexpectedly.”

Joe Palmisano, owner of Four Seasons Diner and Joe Bella’s Italian Kitchen, both in Toms River, said he too has had to close his restaurants earlier and open later in the day because of staffing problems, and that a recent want ad he put out on two different platforms received zero responses. He said he and other businesses owners are desperate for job applicants, even if they cannot work full shifts.