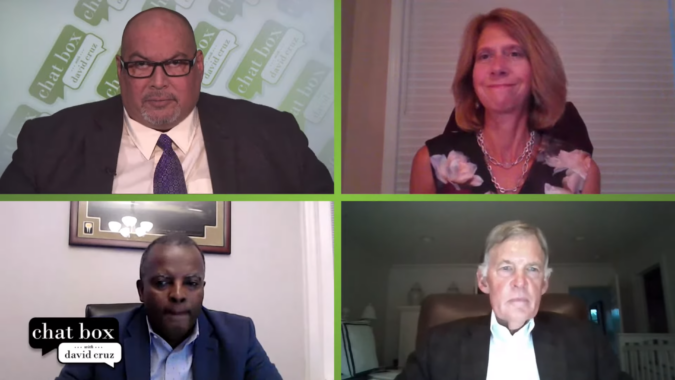 Siekerka said both candidates have a “different approach to get to the same end.”

“When Murphy ran the first time, he ran on an agenda that was taxes and mandates and that impacts businesses negatively in a high-cost state like New Jersey,” Siekerka told Cruz.

“Then if you look at Jack Ciattarelli’s platform, his is one of reform. And so he’s looking at it is, how do we fix what’s broken and bring down the cost of doing business in order to empower and enable business to invest in themselves. Whereas on the other side, we’re causing business to spend more money into the economy.”

Siekerka noted that keeping a Corporate Business Tax increase for the last two years, giving the Garden State the highest CBT rate in the nation, has “carried New Jersey.” That increase was supposed to sunset under Murphy.

“So there’s an example of taxing on one side in order to create economic momentum versus reform and fixing on the other side,” she said.

For the next administration, Harmon said he would like to “hear more dialogue around some systemic issues as it relates to black people, our high poverty, our high unemployment, how we’re going to fix that.”

“There’s a lot of dancing around that. I still say that the trades have a preference in this state whereas black and brown people have to do a disparity study to get into the state’s economy in a more equitable way.”

“(The programs are) more stringent than they were,” Bracken said. “The application process is a little more cumbersome than it was before, but it seems to be bearing fruit. And I hope it does because we have to be competitive with other states to draw business  in here and keep business in here.”