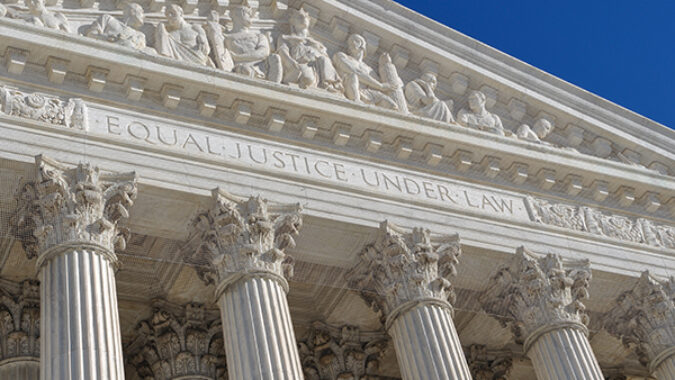 The U.S. Supreme Court on Thursday blocked the U.S. Occupational Health and Safety Administration’s controversial employer mandate that required more than 80 million workers at large businesses to be vaccinated against COVID-19 or submit to weekly testing.

However, in a separate case, the court did allow a vaccine mandate to move forward for certain healthcare workers at hospitals and nursing homes that receive federal monies.

In its 6-3 ruling in National Federation of Independent Businesses v. OSHA, the Supreme Court blocked the Biden administration from enforcing its requirement that employers with 100 or more workers companywide require employees to be vaccinated or tested weekly for COVID-19. The majority said the plaintiffs, a coalition of business and religious groups and Republican attorneys general, were likely to succeed in their case arguing OSHA had overstepped its authority with the vaccine-or-test mandate.

OSHA is only empowered “set workplace safety standards, not broad public health measures,” the justices wrote in an unsigned opinion.

“The Secretary has ordered 84 million Americans to either obtain a COVID-19 vaccine or undergo weekly medical testing at their own expense,” the court wrote. “This is no ‘everyday exercise of federal power.’ It is instead a significant encroachment into the lives—and health—of a vast number of employees. We expect Congress to speak clearly when authorizing an agency to exercise powers of vast economic and political significance.”

An appellate court had initially blocked the OSHA mandate, but the 6th U.S. Circuit Court of Appeals later lifted that stay, allowing enforcement to begin. Vaccination record-keeping and the wearing of masks indoors by unvaccinated workers was supposed to begin Jan. 10 and the Biden administration had planned to delay weekly testing requirements until Feb. 9. The Supreme Court’s decision means no enforcement will take effect until the litigation is resolved.

NJBIA President and CEO Michele Siekerka said the Supreme Court decision will help in not worsening the hiring challenges many businesses continue to face.

In the separate case, Biden v. Missouri, affecting 17 million healthcare workers employed by facilities that receive Medicaid and Medicare funding from the federal government, the Supreme Court said in a 5-4 ruling said it agreed with the Biden administration’s argument that the U.S. Health and Human Services Department did have the authority to require healthcare workers to be vaccinated.

“Vaccination requirements are a common feature of the provision of healthcare in America: Healthcare workers around the country are ordinarily required to be vaccinated for diseases such as hepatitis B, influenza, and measles, mumps, and rubella,” the justices wrote. “All this is perhaps why healthcare workers and public health organizations overwhelmingly support the Secretary’s rule.”

In that decision, the Supreme Court lifted the preliminary injunction issued by a lower court that had blocked the enforcement of the rule requiring these healthcare workers to be vaccinated.