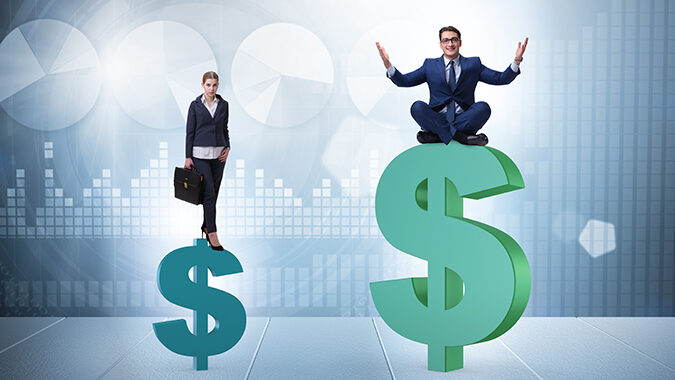 Pay disparities between men and women are wider in some industries than others, even in those where women constitute a greater share of the workforce.

According to Payscale’s 2022 Gender Pay Gap Report, women overall still make just 82 cents for every $1 that men earn when the median pay for all women is compared to the median pay for all men. This measurement, known as the “uncontrolled pay gap,” is worse in some industries, such as finance and insurance industry, where women overall earn only 77 cents for every $1 that men earn, even though women outnumber men in this industry.

When the data is broken down further by occupation, women are paid less than men in every occupational group that Payscale examined. The widest uncontrolled pay gaps were found in the fields of education and law where women overall earn 75 cents and 63 cents, respectively, for every $1 men earn. This indicates, women are much more likely to be employed in lower-paying jobs if they are working in these fields, Payscale said.

Payscale also looked at gender pay gaps for specific jobs when the data is “controlled,” meaning that the men and women compared have the same job title, education, experience, industry, job level, and hours worked. Even when these factors are controlled, women earn 1% less than men.

“The gap should be zero,” the report said. “Women who are doing the same job as a man, with the exact same qualifications as a man, are still paid 1% less than men at the median for no attributable reason.”

Jobs with the largest disparity in wages between equally qualified women and men were:

For its report, Payscale collected salary information earlier this year from more than 933,000 U.S. workers, who reported information about their industry, occupation, location and other compensable factors. They also reported demographic information, including age, gender, and race. To access the complete report, go here.