The Rationale Behind DEP’s 18-ton Cap on Carbon Emissions 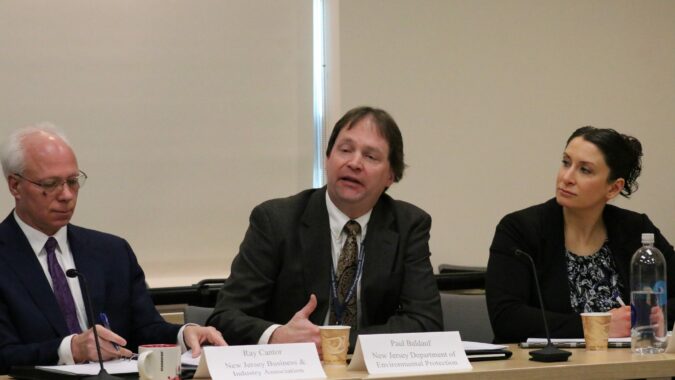 But as DEP Assistant Commissioner Paul Baldauf explained Friday at NJBIA’s headquarters, a lower cap would likely increase overall carbon emissions in the airshed, as well as hit ratepayers with much higher costs.

“Twelve million tons would have more ‘leakage’ and have more impact on the ratepayer,” Baldauf said. “We think the 18-million-ton cap will drive carbon down effectively.”

Baldauf, who is in charge of DEP’s Air Quality, Energy & Sustainability programs, was a guest speaker at NJBIA’s Environment and Energy Policy Committee meeting, where he touched on issues such as fumigation regulations, electric vehicles, transportation pollution and other topics. He was joined by Richelle Wormley, assistant commissioner for Compliance and Enforcement.

The carbon cap proposal is a result of New Jersey rejoining a regional cap-and-trade program,  Regional Greenhouse Gas Initiative (RGGI). That decision was Gov. Phil Murphy’sand the level at which to cap emissionswas based upon extensive modeling of New Jersey’s electric generation sector.

The regulations for rejoining RGGI were proposed in December, and the comment period closed on Friday. (View NJBIA’s comments here.) DEP will revise the regulations and then issue the final rule later this year, possibly as early as May. In addition to the cap, they will cover how generators who don’t meet the cap will obtain allowances, how the allowances will be auctioned off and traded, and how the state will divide the revenues from these trades.

But the issue of leakage will figure heavily into how the program works.

Leakage has to do with where New Jersey gets its power. If the cap is too strict, and a large number of New Jersey power plants can’t meet it, then users will get energy from out of state.

“If our plants aren’t running or aren’t competitive, then Pennsylvania’s plants or someone else’s in the PJM power grid are running and those plants are somewhere between 30 percent and 40 percent dirtier,” Baldauf said. “So we want the cleanest generation possible.”

New Jersey is part of the PJM power grid, as are a few  of the RGGI participants.  Pennsylvania  and other states are part of PJM but not RGGI.