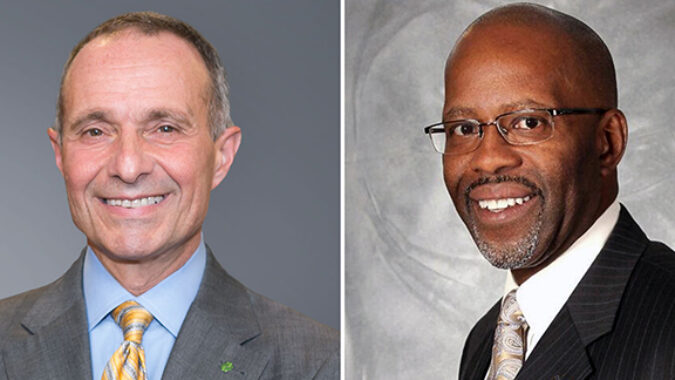 Cama is president of the NYC Metro and New Jersey market for Citizens, one of the nation’s oldest and largest financial institutions, with $224.7 billion in assets.

Horne is the president of JA of New Jersey (JANJ), a nonprofit that works with community volunteers to be part of the solution to reduce educational gaps through no-cost career readiness, financial empowerment, and entrepreneurship programs. Ultimately, JANJ connects students from education to employment, helping youth to be world ready.

Cama brings vast financial experience to NJBIA’s boardroom. He is the former president and chief operating officer and a former board member of Investors Bancorp and Investors Bank, which earlier this year was acquired by Citizens Financial Group. Cama was appointed president of Citizens’ NYC Metro and New Jersey market on April 7.

While at Investors, Cama also served as CFO from 2003 to 2008 and had primary responsibility for the company’s successful conversion to a publicly traded company. In 2014, Investors completed one of the largest capital raises for a publicly traded thrift – over $2.2 billion.

Cama places an equally concentrated focus on corporate social responsibility. In addition to his new role as an NJBIA trustee, he serves on the boards of the Hackensack Meridian Health Foundation, the Federation of Italian American Organization, and the Cathedral Club of Brooklyn.

Horne, who has decades of experience leading nonprofit human services organizations, became president of JA of New Jersey in July after leading the United Way of Union County as its president and CFO for 17 years. During his tenure at United Way, Horne created an extraordinary record of developing strong community partnerships, increasing organizational efficiencies, building and retaining board members, and financial competence.

Prior to his time at United Way of Greater Union County, Horne served four years as president and CEO of United Way of Pioneer Valley in Springfield, Massachusetts, and two years as executive vice president of the United Way of Summit County in Akron, Ohio.

Horne has built a professional reputation as a leader who works hard to maintain the delicate balance running a successful nonprofit: dedication to mission, the need for bold entrepreneurial initiatives, and the application of sound business management.

“The talent and experience that Domenick and James bring to our board is vital to the success of NJBIA’s efforts to continue being the most impactful voice for New Jersey’s businesses,” said NJBIA President & CEO Michele Siekerka.

“Our trustees are invaluable to the success of NJBIA’s mission to provide New Jersey businesses with the information, services and the powerful advocacy they need to succeed,” Siekerka said. “Domenick and James are exemplary business leaders, and we are excited to have them join our board.”

For a complete list of NJBIA board members, go here.﻿