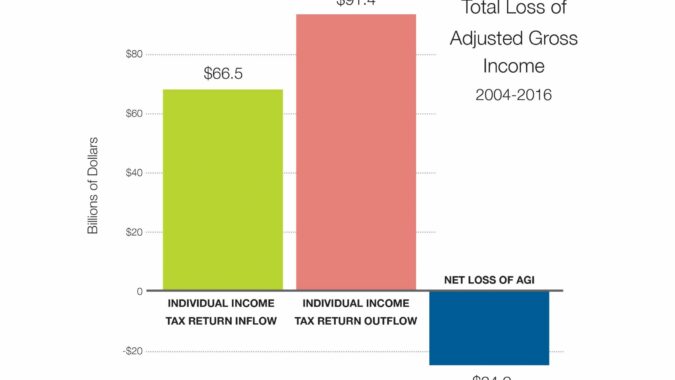 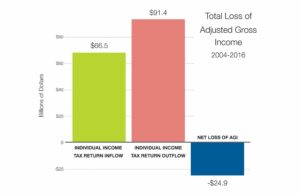 NJBIA has been studying the movement of wealth leaving and coming into New Jersey for a few years now, while a new study by Bloomberg has further confirmed our findings and focused on where the money went. According to the results of its study, published Friday, the big winner is Florida.

“Florida and South Carolina enjoyed the top economic gains, while Connecticut, New York and New Jersey faced some of the biggest financial drains,” Bloomberg writers Lee J. Miller and Wei Lu state.
New Jersey lost 0.92% of its wealth in 2016. That was the fourth largest wealth outmigration by percentage of the total behind Connecticut (1.6%), New York (1.1%) and Illinois (1.09%). New Jersey was third in total net loss with a net loss of about $3.4 billion, behind only New York ($8.4 billion) and Illinois ($4.8 billion).

Florida was far and away the big winner, reeling in a net $17.2 billion. Texas was second with $2.4 billion and South Carolina and Washington each had a net gain of $2.3 billion. Florida was the most frequent destination of wealth leaving New Jersey, as well as wealth from 17 other states.

For policymakers in New Jersey, a big concern is what impact this loss of wealth may have on state and local government programs and services. The loss of wealth is not equal to the change in population. As Bloomberg notes, the people moving to New Jersey brought in about half of the wealth that left the state.

While the analysis didn’t track the reasons people moved where they did, the article suggests that taxes were at least a significant part of the equation.

“While long a haven for retirement, Florida’s effort to lure Wall Street executives has gained traction thanks to a provision in the federal tax law passed by the Trump administration that hits residents of high-tax states by putting a lower cap on state and local tax deductions,” the article states. “Florida is also one of seven states that collect no income tax.”

Despite the numbers, New Jersey continues to pursue tax policies that would seem to encourage wealth outmigration. Last year, the state increased taxes $1.6 billion, mainly by increasing the top marginal income tax to 10.75 percent on income above $5 million, and made numerous changes to the corporation business tax that have dramatically increased revenue collections.

This year, Gov. Phil Murphy has called for another increase in income taxes by extending the state’s 10.75% tax rate to all income over $1 million. NJBIA and legislative leaders of both parties have opposed it.