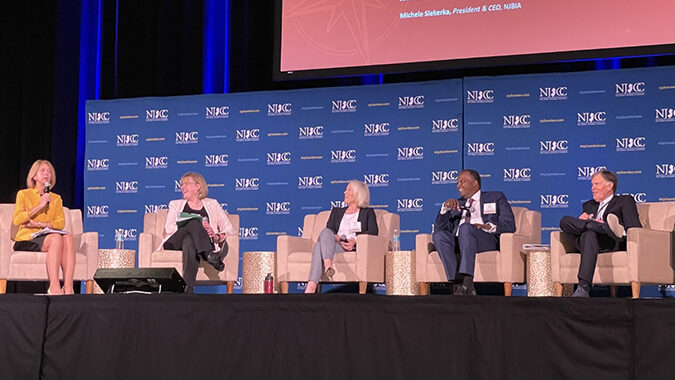 In an improving statistical trend, New Jersey’s unemployment rate dipped to 4.2% for March. Yet the state’s labor force has lost more than 38,000 people since prior to pandemic and Help Wanted signs remain a common sight.

At a State Chamber of Commerce business event this week in Atlantic City, business experts and owners discussed the plight and how New Jersey can best fill open jobs.

“I think one of the biggest issues for us right now is having people to execute the job,” Lisa Chowansky, president and owner of Lebanon-based HC Constructors.

“We’re a heavy civil construction company. We’re out in the field. We can’t have someone building underground infrastructure remotely. We work very closely with a lot of the labor unions and, even in those halls, it’s very hard for us to get labor out there to do the work.”

The solutions, or at least ideas discussed, were varied amongst the panel, moderated by ROI-NJ founder Tom Bergeron.

NJBIA President and CEO Michele Siekerka said more help is needed on the policy side. She credited a comprehensive childcare bill package introduced last week to improve New Jersey’s childcare infrastructure, including providers, employees and parents as a step in the right direction.

“We can’t get our parents back to work if we can’t get our children into safe childcare,” Siekerka said. “Women have been most disproportionately impacted during the pandemic. We have the lowest labor participation rate today of women in the workforce in over four decades. Think about the impact of that.”

Siekerka added that the state may also need to reevaluate its Return and Earn program. Gov. Phil Murphy announced the jobs program in September, which aims to assist unemployed workers in their return to work, while also providing wage subsidies for employers to hire and train new employers with skills gaps.

But most of the $10 million in the program has yet to hit the streets.

“Unfortunately, companies aren’t stepping up to it,” she said. “We have to look back and say why? Why aren’t businesses taking care of that right now?”

“Everything that we’ve talked about here with workforce development and training requires cash,” Bracken said. “Cash is king, and businesses don’t have cash.”

Bracken noted that the nearly $800 million provided by the New Jersey Economic Development Authority during the pandemic had been appreciated and significant, but it had been done in “tranches” with “a certain amount needed to be for this group or that group.”

He said the state needs more of a general fund for the business community, especially in light of the small amount of money for small business in Murphy’s $48.9 billion budget for FY23 – and the nearly $1 billion in new unemployment insurances taxes businesses are being hit with over three years.

“There’s very little left in anything EDA has done in grants for the general business community,” Bracken said. “We have asked for a fund since Day One of COVID to help get businesses back on their feet, to help them with the employment issue, and do whatever they have to do to help themselves.”

African American Chamber of Commerce of New Jersey CEO John Harmon said employment issues can be improved with businesses approaching hiring through the lens of inclusivity and training.

“Years ago, Major League Baseball went outside of the country, and they set up farm teams in the Dominican Republic and Venezuela as a pipeline for talent,” Harmon said. “New Jersey has an opportunity to come into some of the communities that traditionally have not been part of the economy and have those served as that pipeline, providing them with the requisite training.

“And not everyone has to be trained. There are a multitude of people who just need that access to compete.”

Harmon acknowledged DEI partnerships between NJBIA and the State Chamber to advance more proactive DEI efforts amongst employers, but more needs to be done.

“We’re on track, working with Michele and Tom to do that,” Harmon said. “But it all starts with the acknowledgment that we have not collectively done our best to be inclusive.

“We know the state, from a public contractor perspective, is partial to some groups. You know, 1% of public contracts in New Jersey go to Black folks – on a good day. And we all pay taxes. If we can somehow get aligned and impact the underperforming sectors of the state, it could be transformational.”

PSE&G President and COO Kim Hannemann said her company has leaned into DEI – and it needs to. Its Clean Energy Program has a commitment to 2,000 new jobs. And that’s on the heels of hiring more than 1,000 people last year.

“New Jersey is one of the diverse states in the country and it’s real for us in terms of creating an environment here where our workforce reflects our state and people feel included to bring their best,” Hannemann said.

“We work very closely (with AACCNJ) on how we target the underserved communities and bring them in and train them and get them ready for these jobs so when they come out of it, they have a job and a commitment from the industry.”

Chowansky, owner of HC Constructors, said smaller businesses are helped from the community outreach made by big employers like PSE&G.

“I don’t have the resources to do the community outreach that PSE&G will do – but I benefit from that,” she said. “Because if a worker doesn’t stay with PSE&G, they may come to HC.

“So what big business does is important for small business as well because those training programs they’re willing to invest in help all of us to have the workforce that’s ready to do the work that we have all this money to do.”